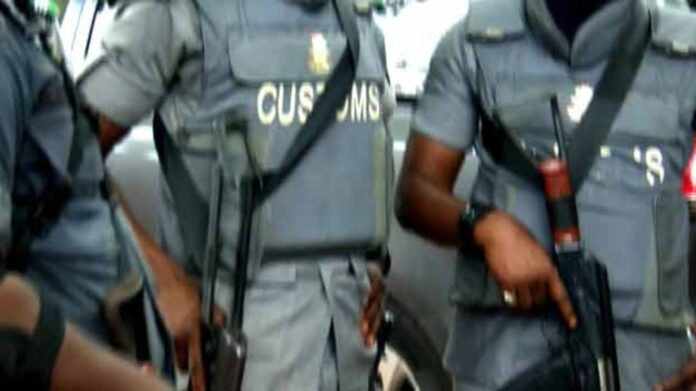 The Ogun Area 1 Command of the Nigeria Customs Service (NCS) on Tuesday said between February to December 6th, 2022, its officials seized 41 sacks and 940 wraps of Cannabis Sativa, 2,250 packets of Tramadol, 73 trailer loads of foreign parboiled rice and other contraband worth N4,886,647,654.92.

Addressing journalists in Idiroko on Tuesday, the Customs Area Controller of the Command, Comptroller Bamidele Makinde also revealed that the seizures included 31 units of Compressors, 16,224 kegs of Premium Motor Spirit (PMS), 19 units of Motorcycles amongst other seizures.

According to Controller Makinde, “In the wake of our anti-smuggling operations conducted in the period under review in different parts of Ogun State, including the creeks, border lines, approved and unapproved routes, the Command recorded a total number of 842 seizures.

“This includes 44,933 bags of smuggled foreign parboiled rice of 50kg each, an equivalence of 73 Trailer loads. Others are as follows: Vehicles used as Means of Conveyance: 99 Units; Foreign Used Vehicles (Tokunbo), 8 Units including one year 2020 Grey coloured Wrangler Jeep with chasis no ICAHIXDN6LW 161338.

“The Total DPV of the above items is N4,886,647,654.92. We were able to record the above-mentioned seizures through intensive round-the-clock surveillance and patrol activities, aided. Y effective deployment of intelligence.”

In the area of revenue, Controller Makinde explained that the Command generated N58,676,751.00 in the period under review.

“The activities from which the Command generates revenue include importation and exportation of goods under the ECOWAS Trade Liberalization Scheme (ETLS) and assessment of merchandise in baggage. It also generates revenue from auction sales of perishable or highly combustible goods such as Premium Motor Spirit (PMS).

“The Command generated the sum of N58,676,751.00 through import duties and auction sales of Petroleum products (PMS) during the period under review.

“Ogun 1 Area Command of Nigeria Customs Service (NCS) conducts its anti-smuggling activities through the deployment of personnel to man all the approved border stations, surveillance and patrol duties.

“The Command makes adequate use of intelligence to aid its operations. These are done in accordance with various sections of Customs and Excise Management Act (CEMA). For instance, Section 147 of CEMA Cap C45 Law of the Federation of Nigeria 2004, empowers Customs operatives to search premises.