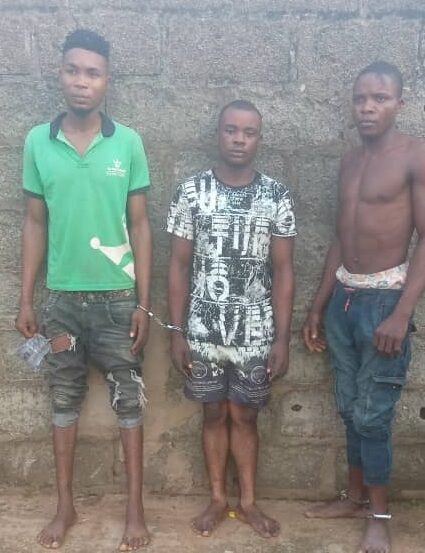 The Ogun state police command have arrested three suspcted cultists who allegedly kidnapped one person and forced him to drink blood as initiation process.

The suspects are Williams Omoori a.k.a Tension, Edet Godswill and Emmanuel Dimgba were said to have been arrested after one Celestine Onyebuchi lodged complaint against them at Igbesa Divisional headquarters of Nigeria Police, Ado-Odo/Ota local government area of the state.

According to statement from the Spokesman of the state police command, DSP Abimbola Oyeyemi over the weekend, Celestine was said to have claimed that the three alleged cultists abducted him and took him to an uncompleted building, where he was tortured and forced to join their confraternity.

The victim explained further that, the suspects after torturing him, gave him blood to drink as a sign of initiation.

Upon the report, the Dpo Igbesa Division, SP Abayomi Adeniji, quickly mobilized his men and went after the suspects.

They were said to have been subsequently apprehended at their hideout within Igbesa community.

On interrogation, the three suspects confessed been members of Supreme Vikens confraternity. They confessed further that they were looking for more members to join them which led them to the abduction of the complainant who may not want to join them through persuasion.

Meanwhile, the Commissioner of Police, CP Edward Awolowo Ajogun, has ordered the immediate transfer of the suspects to anti cultists section of the state Criminal Investigation and Intelligence Department for discreet investigation.

The CP also warned that war against cultism in the state is a continuous one, but there is opportunity for those who want to renounce their membership to do so before the long arms of the law caught up with them.