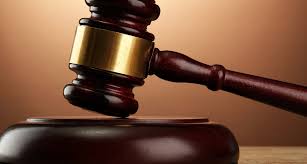 A secondary school student, Segun Dosumu, is to spend three weeks in jail with hard labour for threatening to kill one of his teachers.

This is as an Abeokuta Magistrates’ Court found the 20-year-old student guilty of the charge preferred against him on Thursday.

Dosumu, a resident of Iboro area of Ogun State, was said to have pleaded guilty to the charge when it was read to him in court.

As a result, the Magistrate, Mr S. S. Sotayo, after reviewing the facts of the case presented before him by the Prosecutor, ASP Wale Diyaolu, convicted Dosumu, but with an option of N200,000 fine.

According to the Magisterate, all the evidences before the court had proven beyond any reasonable doubt that Dosumu was guilty of the crime as charged, even aside his admission of guilt.

The prosecutor, Diyaolu, had earlier informed the court that the convict committed the offence on Tuesday at Eyinni Comprehensive High School, Iboro Yewa North Local Government Area of Ogun State.

Diyaolu had disclosed that the SSS3 student threatened to kill or injure the teacher, identified as Mr Ismail Fadeyi, with a broken bottle.