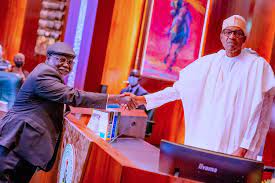 Commendations have continued to trail the resignation of the erstwhile Chief Justice of Nigeria, Justice Tanko Muhammed just as the new acting CJN, Hon. Justice Olukayode Ariwoola has been charged to embark on reforms that will cleanse the third Arm of Government and restore the lost hope of the common man in the judiciary.

Recall that Justice Tanko Muhammed had earlier been accused by 14 other members of the Supreme Court’s Justices over allegations of corruption and mismanagement of funds meant for the Bench.

Among the allegations levelled against him was owning some secret foreign accounts, which were run in a manner that was inconsistent with financial transparency and the code of conduct for public officials.

Though he denied all the allegations, Tanko resigned from his position, citing ill-health as reason yesterday night.

Shortly after his resignation, President Muhammdu Buhari swore in the Justice, His Lordship Ariwoola, who was next line, as prescribed by the constitution, on Acting Capacity until his appointment is formally approved by the National Judicial Council  (NJC).

The President, Muhammadu Buhari administered the oath of office to Justice Ariwoola during a swearing-in ceremony held at the Council Chamber of the Presidential Villa in Abuja, the nation’s capital.

He is expected to serve in an acting capacity till further confirmation by the National Judicial Council (NJC).

Meanwhile, the former Vice President of Nigeria, and the current Presidential flag-bearer of the Opposition Party, Atiku Abubakar has commended the former Chief Justice courage to throw in the towel in the face of controversy capable of denting the trust of the common on the Judiciary.

Atiku in a statement obtained from his official Facebook page by one of our Correspondents, wished the Justice Tanko well even as he commended the former Chief Justice for his action and service to the nation.

The former Vice President went on to wish the newly sworn-in Acting CJN, Justice Olukayode Ariowoola, success as he steps in to fill the gap.

Atiku promised the new acting CJN of his unalloyed commitment to advancing the frontiers of judicial independence and the promotion of separation of powers as the bedrock of deepening democracy and development.

Mr Akpata made the call on Monday in a statement obtained by Nigerian NewsDirect while reacting to the resignation of the former CJN, Justice Ibrahim Tanko Muhammad.

He emphasised reforms in the judiciary, urging the incoming Chief Justice to make judicial reform and the restoration of public confidence in the judiciary his first task upon assuming office.

The NBA president pledged the readiness of the Bar to work together with Justice Ariwoola in cleansing “the Augean stable and addressing the ills that have continued to plague not just the judiciary but the entire legal profession.”

Speaking on Channels Television’s programme, Politics Today,  Barrister Jibrin Okutepa (SAN) said if the reason for the former CJN to resign was a result of health issues then, it shows that he was commendable for the action he took.

He said the decision to resign over  illness was something that is hardly seen in the country and this showed a sense that needs to be reckoned with.

According to him, “It is unprecedented in Nigeria history for public officer to resign even when they are chronically ill. So, that His Lordship decided to resign on the basis of ill health, based on what we have read, is commendable.

“Because you can see that a lot of public office holders are ill and have refused to resign, so for me as a person, I must commend his lordtship for that step.

On Ariwoola as the Acting Chief Justice of Nigeria, he said the task ahead is very challenging as steps are needed to redeem and continue to uphold the judiciary arm of the government in the country.

He said the new CJN needs to act on a leadership with full attention and focus on what needs to get done, urging him to make the right decisions when judgments is to be passed.

“I am happy that he was one of those Justices from the Supreme Court from what we read, complained about the leadership and now the leadership has been handed over to him.

“I am expecting, therefore, from his Lordship, lawyers and millions of Nigerians is that, he must, as a matter of necessity, provide impeccable integrity driven leadership one that will be the kind sharing examples of other judiciary officers to follow. I expect my Lord to lead the Supreme Court, to give us judgements and decisions that have the context of justice.”

He further explained that even though the judiciary, for a while, has been going through a phase that doesn’t align with its natural qualities, attention is needed to save the system.

“We are expecting the Supreme Court of Nigeria under his leadership to make judgment that will bring the unity of this country together not a judgment that people will begin to interpret and create rascality and bringing the credibility of the legal profession to total disrepute,” he said.

During a chat with a correspondent of Nigerian NewDirect yesterday, Barrister Odeyemi Raheem Funminiyi maintained that the resignation of the erstwhile Chief Justice was based on Health ground, which he needs to “face squarely.”

In his words, “It is no more a news that My Lord Justice Ibrahim Tanko Muhammed CJN as he then was had resigned as the Chief Judge of Nigeria.

“His notice of resignation bears that he did so as a result of his failing health which he will need to face squarely. As reported, his resignation was not hinged on any corruption allegations.

“It is a constitutional matter and the President has rightly reacted to it. Our law says in the instance case that the next most senior Justice of the Supreme Court shall be sworn in acting capacity as CJN and that had been done. There shouldn’t be any vacuum in the judiciary hierarchy of the Country.”

While responding to a question on whether the former Chief Justice should be investigated, and possibly prosecuted if found guilty, Funminiyi said, “the allegations have not been substantiated. The letter containing the allegation was written to him and not to any anti grant or any security agency.

“So, who is going to investigate and prosecute the allegations he is not aware of?

“The onus lies on the new CJN to petition the right agency now he is sworn in if at all there is any serious corruption allegations against the former CJN.”

Efforts to have Professor Bolaji of the ICPC speak on the potential investigation into the allegation levelled against the former Justice, Tanko Muhammed speak on the issue failed text messages were not responded to.

In a related development, the Governor of Oyo State, Governor Seyi Makinde congratulated Honourable Justice Olukayode Ariwoola on his elevation and swearing-in as the Acting Chief Justice of Nigeria by President Muhammadu Buhari.

Governor Makinde described Iseyin-born Ariwoola’s elevation as Acting CJN as a deserving development and reward for diligence, patriotism and service to the nation.

According to a statement credited to the Special Assistant (Print Media) to the governor, Moses Alao,the Governor said he had no doubt that the jurist would restore the glory of Apex Court and the judiciary, “I congratulate a noble son of Oyo State, His Lordship, Justice Olukayode Ariwoola, on his elevation and swearing-in as Chief Justice of Nigeria, in acting capacity.

“This elevation comes as a deserving development, a well-deserved promotion that comes after decades of hard work, diligence, patriotism and forthrightness in the judiciary.

“I have no doubt that the new Acting CJN will turn around the fortunes of the judiciary and the apex court for good by bringing his wealth of experience to bear in restoring the glory of the judiciary.

“On behalf of the good people and government of Oyo State, I celebrate Justice Ariwoola and pray to God to grant him the needed enablement to succeed in the new office.”