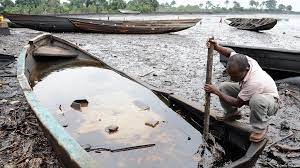 The Obiakpu community in Imo has accused the Shell Petroleum Development Company of oil spill devastation, according to a statement made available to our correspondent on Friday by Spaces For Change.

It was stated that the spillage started two years ago from leakages of crude oil pipelines owned by the Nigeria Petroleum Development Company and operated by SPDC.

This, unfortunately, resulted in an inferno in the community under the Ohaji/Egbema Local Government Area of the state that reportedly raged continuously for three days from 28th May to 30th before it was put out.

A video showing the damage caused to the community was shared with journalists.

They said that the spillage had been reported to SPDC when it initially started in 2019 but the company allegedly did not correct the situation until after a year and six months during which the wreckage had devastated the community.

They demanded that the company began the process of compensation and cleanup of Obiakpu.

SPDC in a response to an email by our correspondent said that the spill was a result of third-party interference with its joint venture facility.

It said that the company responded promptly to contain the spread and put out the fire following its policy on oil spills.

The company stated, “Illegal activities by pipeline vandals, crude oil thieves and illegal refinery operators often result in fire outbreaks around our facilities and we respond promptly to quench the fire and clean up its impact.

It added that it would continue to work with government, NGOs and communities to control illegal activities.