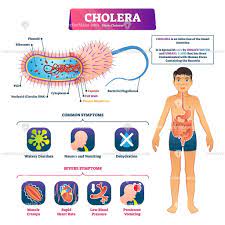 With more states getting hit by cholera outbreak, a Medical Imaging Scientist, Dr Livinus Abonyi, has counseled women to pay special attention to their kitchens, toilets and surroundings.

Abonyi, a lecturer in the Department of Medical Radiography, Faculty of Clinical Sciences ,  College of Medicine, University of Lagos (CMUL), gave the advice in an interview with newsmen on Tuesday in Lagos.

Report states that cholera is an infectious and often fatal bacterial disease of the small intestine, typically contracted through ingestion of infected water or food, causing severe vomiting and diarrhea.

According to World Health Organisation (WHO), there are 1.3 to four million cases of cholera, with attendant 21,000 to 143,000 deaths worldwide, arising from cholera.

“Since the disease is contracted through ingestion of infected water or food, including unhygienic environment; women must protect their families by ensuring proper sanitation in the kitchen, toilets and the surroundings.

“That is the best and simplest way to avoid contact with the cholera disease,” Abonyi said.

He advised women to always tidy their kitchens before going to bed, and also ensure that all food items, whether cooked or raw, are properly covered.

Abonyi highlighted the importance of securing food items usually dried under the sun, especially those in powdered form, to avoid contact with flies or bacteria-causing organisms.

The scientist urged residents of the state to maintain proper hygiene and keep their environments clean so as to rid the environment of bacteria-causing parasites/organisms.

He also emphasised the need to keep cooking utensils well-secured, to avoid being contaminated by bacteria.

Contributing, Dr Olumuyiwa Akinola, a General Physician with Isolo General Hospital Lagos, who also spoke on the cholera disease, advised people to avoid drinking of untreated water or coming in contact with feces.

Akinola emphasised that cholera disease was spread by eating or drinking food or water contaminated by the feces (poop) of an infected person.

According to him, individuals living in places with inadequate water treatment, poor sanitation, and inadequate hygiene (cleanliness) are at a greater risk for cholera.

“Everything possible should be done to ensure you drink and use safe water to brush your teeth, wash and prepare food.

“People should cook their food properly, especially seafood; keep it covered, and eat it hot, so as to reduce the risk of contracting the disease,” he advised.