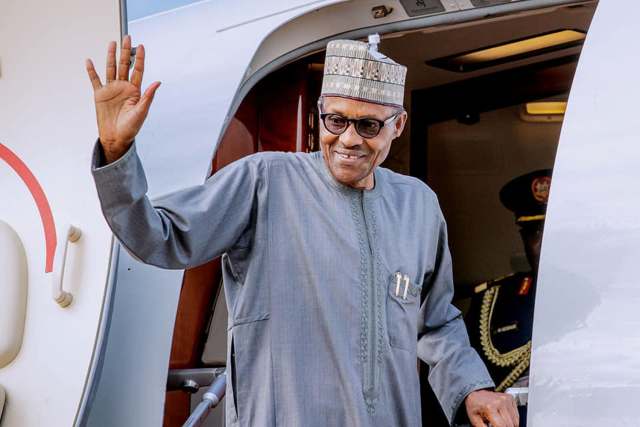 President Muham madu Buhari is set to depart for the United Kingdom on Tuesday, March 30, 2021 for a routine medical check-up.

According to a statement signed by the Special Adviser to the President on Media and Publicity, Femi Adeshina, late Monday evening, the president will fly to London after a morning meeting with security chiefs at the Presidential Villa.

“He is due back in the country during the second week of April, 2021,” an official statement read.

Although the President visited  the United Kingdom severally during his first term in office,  where his doctors treated him for undisclosed ailments, this is the first time, President Buhari has sought medical treatment outside Nigeria since the pandemic.

However, the President is embarking on the journey 48 hours before the members of the Nigerian Association of Resident Doctors (NARD) begins their strike on Thursday, April 1.

In a statement jointly signed by NARD President, Dr Uyilawa Okhuaihesuyi; its Secretary-General, Dr Jerry Isogun, and its Publicity/Social Secretary, Dr Dotun Osikoya, the union said the industrial action would be total and indefinite, should the Federal Government fail to meet its demands.

It explained that the decision to go on strike was taken at the extraordinary National Executive Council of the union held on Saturday at the National Hospital in Abuja.

During the meeting attended by over 50 chapters of the association across the country, the doctors reviewed the earlier ultimatum given to the government and scheduled to expire on Wednesday.

In their resolutions, the doctors called for the immediate payment of all salaries owed to all house officers, including March salaries before the end of March 31.

They also asked the government to commence the immediate payment of all salary arrears, including March salaries to their members in all Federal and state tertiary health institutions.

The union resolved to call for the upward review of the current hazard allowance to 50 per cent of consolidated basic salaries of all health workers, as well as the payment of the outstanding COVID-19 inducement allowance.

They also sought the immediate abolishment of the exorbitant bench fees being paid by their members on outside postings in all training Institutions.