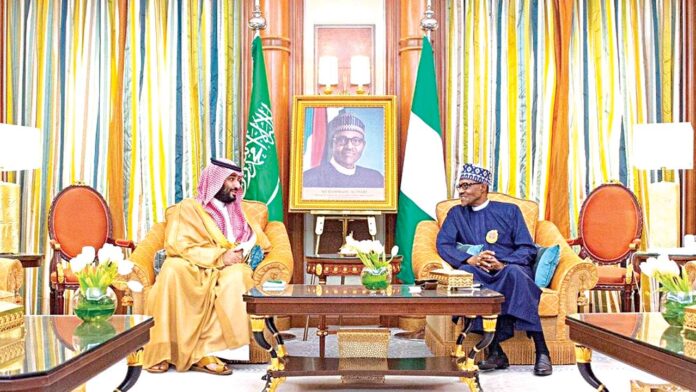 As part of efforts to strengthen the long standing bilateral  cooperation for mutual benefits of the two countries, Nigeria and Saudi Arabia delegations are currently meeting.

The 2nd  Session of Nigeria – Saudi Arabia Joint Commission which is scheduled to hold for three  days in Abuja kick-started on Monday and is expected to end by Wednesday.

In his opening speech, the Minister of State for Foreign Affairs, Zubairu Dada, said the session has been  regrettably postponed several times due to circumstances beyond the scope of their immediate control and expressed optimism that the outcome of the Joint Commission will be worthwhile for the two countries.

While appreciating the Kingdom of Saudi Arabia for the successful conduct of the 2022 Hajj operation, the first after the COVID-19 pandemic and the far reaching socio-economic transformation currently taking place in the Kingdom under Vision 2030, he assured the country delegation that Nigeria is wholeheartedly committed to the bilateral goal in order to foster an all-round development.

“Let me state that Nigeria is similarly pursuing a number of reforms aimed at liberalizing and digitalizing the economy as well as creating more opportunities for our women and teeming youth aimed at paving the way for a more sustainable future. We believe that our collective endeavours would positively impact on Nigeria-Saudi relations with a view to raising them to a strategic level.

“It is pertinent to recall that our two friendly countries signed the General Agreement for Cooperation between them on the 20th October, 2003 in order to promote mutually beneficial cooperation for both parties. This birthed the establishment of the Nigeria-Saudi Joint Commission.

“We thank the Kingdom for hosting the First Session of the Commission in Riyadh, Saudi Arabia from 11th -12th March, 2013. The 2nd Session which was supposed to have been held two years later could not take place until now due to a number of reasons, including the recent pandemic. It can further be recalled that during the First Session, a number of MoUs and Agreements covering various aspects of bilateral cooperation were signed by the two sides,” Zubairu said.

He added that by hosting the 2nd Session of the Joint Commission, Nigeria which attaches great importance to her relations with the Kingdom, is demonstrating her strong and unwavering commitment to further boost and elevate the existing historical ties binding the two countries to a new height.

“We hereby also affirm our determination to ensure that these relations are transformed into a win-win partnership for our mutual benefits. I further wish to assure you, Honourable Deputy Minister and esteemed members of your delegation, of our full commitment to cooperate with you throughout this meeting to ensure that the 2nd Session of the Joint Commission is successful.”

He further charged the senior officials and experts of both countries, to kindly note as they proceed with the important task of negotiation of the various MoUs/Agreements, they should adopt a spirit of cooperation and flexibility with a view to concluding and sign the long delayed agreements/MoUs at the end of the Joint Commission meeting.

“I firmly believe that our two countries and people are eager for this Session to produce the desired positive outcome which will bring a new era in Nigeria-Saudi Cooperation as we also create the necessary mechanism for the implementation of these agreed frameworks with minimum delay.”

Also speaking, the Saudi-Arabian Deputy Minister for Agriculture, Ministry of Environment, and Agriculture, Engr. Ahmad Al-Khamshi, said his country places great importance on the General Agreement on Cooperation signed between the Kingdom of Saudi Arabia and Nigeria in 2003 and the meetings of the Saudi-Nigerian Joint Committee, which he said, constitutes the effective tool in implementing the agreement and laying the specific foundations for enhancing economic, commercial, investment, scientific and cultural cooperation between the two countries.

He further stated that emphasis must be given to activate the work of both the agreement and the joint committee through the development of effective mechanisms and programs to implement what emanates from the meetings of the Committee, and to continuously review and follow-up through dialogue, consultation and communication between the competent authorities in both countries to implement it, as well as removing obstacles and to learn lessons to develop joint cooperation in the interest of both countries.

“This Meeting represents a practical approach in the path set for enhancing cooperation between our two countries, as there are many promising opportunities for cooperation in several fields, including trade, investment and technology. Among these opportunities was the G20 Financing for Sustainable Development Initiative to which was launched by the Kingdom of Saudi Arabia during its G20 presidency. Saudi Arabia and Nigeria teams are working on this matter.

“I also highlight the great importance of the role of the private sector in implementing economic cooperation projects related to trade and investment exchange. For this reason, we give priority to the leading participation of the private sector in both countries. We hope that this sector will have the appropriate and stimulating atmosphere for its effective participation in translating the available economic opportunities into practical projects of benefit to our two countries,” Ahmad said.