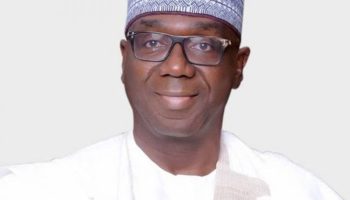 A chieftain of the All Progressives Congress (APC) in Kwara, Amb. Tajudeedn Olesin, has advised the Gov. AbdulRahman AbdulRazaq not to allow sycophants lead him astray.

Oleshin, who gave the advice on Tuesday in an interview in Ilorin, said the governor should stop listening to sycophants if the crisis in the party would end.

According to him, “The crisis rocking the party was aggravated by the sycophants that surround the governor,” adding that, “they were feeding fat from the crisis.”

Olesin identified root of the crisis in APC as leadership failure, adding that leadership is all about management of crisis.

“As a stakeholder in the party, I think the crisis is unnecessary. It is a failure in leadership style; the governor has all the necessary ability to correct the issue, to lead.

“I wrote a letter to the governor and I told him he has the mechanism to solve the problem.

“I advised him to forget about the people that are deceiving him; they are there creating problem for the party.

“The governor should have focus and call the people together and move the party and the state forward, but the governor is taking the matter too personal, if care is not taken, it will be a sorry end if he continues like this.

“The major problem is leadership failure; forget about 2023, this crisis started in 2019, if the foundation of the building is solid, it will stand well.

“I said the governor has all the mechanisms to resolve this crisis without anybody questioning his second term, if the governor leads as he supposed to lead, we won’t have the problem.

“There are many sycophants surrounding him, he should not allow sycophancy in his team, he would have been a perfect leader, there is a total collapse of leadership in the system,” Olesin said.

The APC stalwart condemned the ongoing membership registration and revalidation exercise in the state as nothing to write home about, describing the process as fluke, sham and fraudulent.

“That was what prompted me to write an open letter to the governor because the mandate of the national headquarters was that they should open registration portal for new members and old members should revalidate their membership.

“The way the governor is doing it is against the directives and guidelines from the national body.

“If the governor is sincere, he should not listen to the sycophants that are deceiving him, let him carry all the tendencies along, those deceiving him are looking for what to eat and making the governor to lose focus,” Olesin said.

He therefore called on the national secretariat of the party to urgently to redress the exercise in Kwara, saying that if they refused to act, the matter may go beyond control.

Olesin described the purported removal of Bashir Omolaja Bolarinwa (BOB) as caretaker chairman as illegal and not in line with the constitution of the party.

“We should not deceive ourselves, the removal is not in line with APC constitution, even the governor and others behind it know that it is totally illegal.

“If BOB has erred, what is expected of the party members and even the governor himself that is pretending that he doesn’t know anything, he would be fueling crisis and saying he don’t know anything.

“In civil service, don’t let me come to party, if somebody commits an offence, there would be a petition against the person.

“A panel will be set up to probe; the panel would decide and recommend to the highest authority that is why I call it illegal.

“Look at when they were doing the swearing-in of the caretaker committee, the leadership of the party pronounced that all the state chairmen should automatically become the caretaker chairmen.

“NEC will now call an emergency meeting to rectify it. It is like they are just deliberately digging the grave of the party in Kwara, the party that many people laboured for,” he added.

Olesin therefore appealed to the governor to embrace peace and carry all the tendencies along for lasting peace in the party.

“The governor is a gentleman; let him exhibit the gentility in handling crisis.

“What made a manager to be a manager is how he handle crisis, once you cannot manage crisis, then the person is a failure,” he noted.