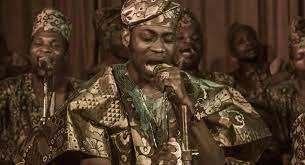 A film dramatising the life of legendary Apala musician, Ayinla Omowura, is to premiere in Nigerian cinemas Tuesday, June 18.

The biopic was shot in Abeokuta and tells the story of the Apala legend’s rise to fame and his tragic end.

The production for the movie began December 2020 with actor, Adedimeji Lateef cast in the lead role.

The works of the late Ayinla Omowura are the best seller among Nigeria’s evergreen music artists both dead and alive.

The Abeokuta, Ogun State-born musician’s career took root in the early 1950s, when he started with a brand of music called Olalomi which was popular and became the anthem of the young people both in Nigeria and the West coast.

His musical career took a new dimension when he joined EMI Nigeria, now Ivory Music, in 1970 and recorded a single titled ‘Aja t of oju d ejo’ in June of that year.

All of them recorded huge success as they were reported to have sold over 50,000 copies each on the day of release.

The legend was overwhelmingly successful such that he became an idol to the masses back then.