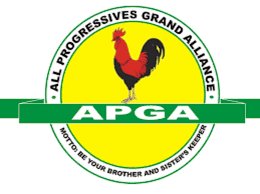 Dr Edith Ugwuanyi, the Enugu State deputy governorship candidate of All Progressive Grand Alliance (APGA), has assured of women inclusiveness in governance, if given the mandate in 2023 poll.

Ugwuanyi said this when she addressed women from various communities in Nkanu East Local Government Area (LGA) of the on Wednesday.

She also promised to ensure protection of collective women interest if voted in 2023.

Newsmen report that Ugwuanyi was the running mate of Frank Nweke, the state APGA governorship candidate.

“I urge you to join hands with me to commend Nweke for choosing a woman of character and caliber, a woman who is highly informed like me, to be his running mate.

“I am assuring you that we will deliver for the women and children in the state especially for their well-being,’’ she said.

Earlier, the state APGA Chairman, Mr Ndubuisi Enechionyia, said it was only Nweke that dimmed it fit to choose a woman as his governorship running mate.

“This indicates that he knows the worth of women and their invaluable role in driving development in the society,’’ he said.

Speaking, Nweke lauded the qualities of Ugwuanyi who was an accomplished professional and a peoples-oriented person, saying she would be reminding him of the promises he made to people.

The women expressed pleasure that Nweke selected a woman as his running mate, praying that God would grant them success in their quest for a better Enugu State.

“Nweke and Ugwuanyi were resolute in their response to deliver on the facilities and infrastructure needed to give us a good quality of life,” the women said.