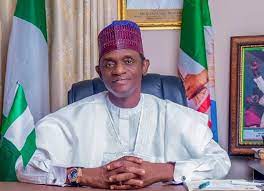 The  leaders of the ruling All Progressives Congress (APC) are tinkering with the idea of postponing its National Convention, earlier slated for February 2022, Nigerian NewsDirect can authoritatively report.

Some highly placed sources within the party told our correspondents that there are high level meetings and conversations ongoing to consider the best possible option at keeping the shape of the party ahead of the 2023 general elections.

A source who craved anonymity but highly placed within the party told Nigerian NewsDirect that leaders of the party are concerned about the health of the party, post Natjonal Convention.

His words: “The idea of holding the National Convention in February as earlier slated has not been completely ruled out. There is still a possibility of going ahead with the Convention.

“However, there are some conversations among party leaders and some powerful forces in the party to the effect that the National Convention could destroy the needed unity and cohesion of the party ahead of the general elections as some interest groups are he’ll bent on having their way.

“Those who are calling for the postponement of the Convention seem to be having the upper hand at the moment as serious discussions are ongoing. The validation of the Caretaker/ Extraordinary Convention Planning Committee by the Supreme Court has emboldened the proponents of Convention postponement. Their argument is that since the Supreme Court has affirmed the legality of the Committee, it might be save to allow them continue to pilot the affairs of the party until it is safe enough to conduct a credible Convention and maintain the unity and strength of the party.”

The source also said the CECPC has done a great job of stabilizing the party and  bringing in high-worth individuals capable of helping the party win the 2023 elections.

“That Mai Mala Buni is a dangerous ‘transfer market’ specialist. See the dexterity with which he signed Governors, Senators, Representatives and other big political players into the party,” he said, adding the Governor has been able to combine the governance of his state and the leadership of the party excellently.

However, a Member of the House of Representatives loyal to Asiwaju Bola Ahmed Tinubu said the Convention must be held in February. Tinubu is believed to be interested in the Presidential ticket of the party.

The House of Representatives Member who doesn’t want his name mentioned for political reasons said the only way to save the party from total collapse is to immediately hold the National Convention.

“How can anyone be contemplating the postponement of the National Convention that is long overdue? Anyone contemplating that is out to kill the APC. A few Governors cannot continue to hold the party by the jugular. See how they kill Direct Primary in our proposed Bill just because they want to continue to control the party for their selfish reasons.

“The cabal controlling APC should be advised to conduct the Convention. I am saying this as a member of the party and not speaking for Asiwaju Bola Ahmed Tinubu,” he said.

It would be recalled that a senior member of the party  and Senate Majority Whip, Sen. Orji Uzor Kalu, last month, called for the indefinite postponement of the National Convention in order not to disrupt the current state of the party.

He said a National Convention in February may damage party cohesion and affect the chances of the party ahead of the general elections.

On the other hand, some young elements in the party have already threatened to take over the party if the party fails to conduct its National Convention as soon as possible.

It is not in doubt that the battle within the party is not unconnected with political battles ahead of the 2023 presidential election.