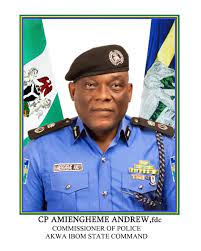 The Commissioner of Police in Akwa Ibom, Andrew Ameigheme, has cautioned perpetrators of domestic violence to desist from the act.

The CP gave the warning in a statement by the State Police Public Relations Officer (PPRO) SP Odiko Macdon, in Uyo on Thursday.

Ameigheme explained that the command under his watch would spare no resource in bringing perpetrators of domestic violence to book.

He reiterated that the command had arrested one Mr Enoch Christopher, a resident of Eket Local Government Area (LGA) who hails from Ebonyi for murdering his wife and burying the corpse in a shallow grave in his compound.

Ameigheme said that the suspect was the Founder and General Overseer of Omega World Global Ministries at Ikot Abia in Okon-Eket in Eket LGA.

The CP worried by the action of the suspect, called on spouses to be amenable to tolerance and resolve domestic issues before they degenerate into violence.

He explained that the suspect who had domestic differences with his wife confessed to have beaten her to death as a result of the unresolved differences on June 9.

Ameigheme said that in order for the suspect to cover his tracks, he dug a shallow grave in his compound and buried her.

He said that the deceased’s corpse had been exhumed by the Police and deposited in the mortuary for autopsy.

“The CP has ordered the Deputy Commissioner of Police in-charge of the State Criminal Investigation and Intelligence Department (SCIID) to take over the matter for discreet investigation.

“He has assured that the suspect will be charged to court as soon as investigation is concluded.

“A source who did not want to mention his name explained that the suspect allegedly killed her wife and quickly buried her on Wednesday June 9, inside his rented Church apartment.’’