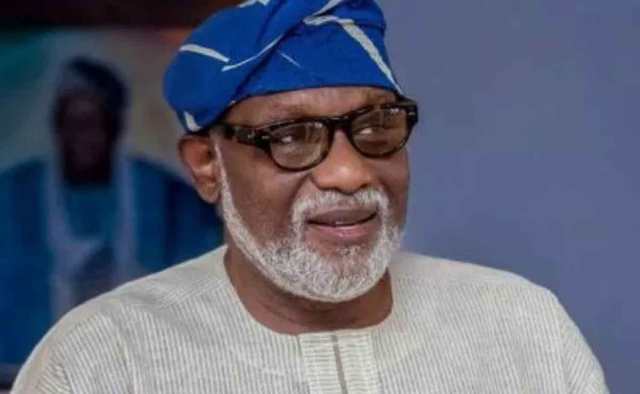 Gov. Oluwarotimi Akeredolu of Ondo State has eulogised the state Commandant of the Nigeria Security and Civil Defence Corps (NSCDC ), Dr Hameed Abodunrin, for his commitment to service of humanity.

Akeredolu gave the commendation in Akure on Wednesday at the send-off programme organised for the commandant by the state command of the NSCDC and the presentation of his books on children’s security.

The Governor, who was represented by his Deputy, Mr Lucky Aiyedatiwa, described Abodunrin as a real security expert and scholar who had helped the government in enforcement of law and order in the state.

Akeredolu, who also acknowledged the roles played by the NSCDC in ensuring the security of lives and property of the people, said Abodunrin’s efforts at securing the state had yielded positive results since he was posted to the state.

According to him, the roles played by the NSCDC at securing the state in the last 15 months that Abodunrin took over the helm of affairs of NSCDC cannot be underestimated.

“I can tell you, Abodunrin is a fine officer, very smart, very skilful, highly educated and also a combatant.

“Abodunrin has proved to be a security expert and a real scholar. His academic prowess has been brought to the fore and he has proved that his doctorate degree in peace and conflict studies, which he bagged from the University of Ibadan, is valuable.

“This is a man that loves training and to retrain. No wonder he is now going back to be retrained at the National Defence College in Abuja for him to be more effective in his job.

“On behalf of the good people of Ondo State, the government and all the people of the state, thank you for your immense contributions to the security of the state.

“For your service to humanity; for the protection of lives and property of everyone both indigenes and residents of Ondo State during the time you spent with us, we want to say thank you,” he said.

The Governor also called on officers and men of the NSCDC in the state to continue with the foundation laid by Abodunrin in the area of security and intelligence gathering.

Akeredolu, who also talked about the books written by the commandant, said they would not only help the children but also their parents or those managing schools, saying it would be good for policy makers.

“Security is everybody’s business not just for security agents alone and it is high time we begin to learn the basics of security,” he said.

Earlier, Abodunrin appreciated the state government and security agencies for their support and expressed his willingness to continue to serve humanity and the society in any position.

He explained that his success was as a result of the support and cooperation he enjoyed from the officers and men of the Command.

He said the decision to write the books was borne out concern for the security of children in the country.

Abodunrin, who said his 15 months in Ondo State birthed the establishment of two marines based in the state, said a bullet-proof multi-million gunboat was also inaugurated while an ambulance and a Jeep were also given by the NSCDC headquarters, Abuja.

“I am not regretting for staying in Ondo State but the only thing that I am still worried about is the consciousness of our people as far as security is concerned,” he said.

Similarly, Dr Bode Ayorinde, Pro Chancellor of Achievers University, Owo, and Chairman of the occasion, eulogised the giant stride of the commandant in the state, saying those who took the security of the country as a career should be celebrated.

“Security comes first as number one in the society because without security, there will be no peace and development. So it is when people are secured that we can talk about development,” he said.

Others present were, representatives of Department of State Services; Commander of Air Force Base 209 Quick Response, Ipetu-Ijesa; Federal Road Safety Corps, Fire Services, amongst others.