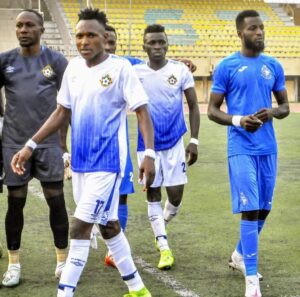 Former Abubakar Bukola Saraki (ABS) Ilorin FC prolific attacker, Wasiu Alalade, has said he almost gave up on his soccer career due to a lingering injury on one of his legs.

Alalade, now on loan to Kwara United from ABS Ilorin FC, told newsmen on Sunday in Ilorin that the injury period was one of the most difficult moments of his life.

The player, who spent over a year in Argentina for treatment, said if not for the doctors that kept assuring him he would have given up on playing football again.

Reports said that the former Flying Eagles International sustained the injury while on national duties in his playing days at Enyimba International FC of Aba.

“God first, I feel great to be back on the field of play after a lengthy period.

“I give glory to Allah that I am back on the field to do what I know how to do best.

“I went through many ups and downs during the injury period, the treatment and recovery which I went through in Argentina was successful.

“The doctors’ assurances came as a huge relief for me,” Alalade said.

He thanked his parents for their support during the period as they kept praying for him and assuring him that everything will be fine and that he should keep fighting to come back stronger.

Alalade made his return to the field of play on Wednesday during Kwara United vs Enyimba rescheduled Nigeria Professional Football League (NPFL) Matchday 2 encounter in Ilorin after close to two years absence.