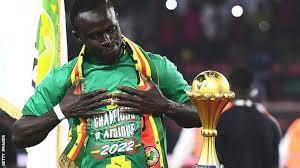 Senegal forward, Sadio Mane, has received congratulatory messages from his Liverpool teammates following his triumph at the 2021 Africa Cup of Nations (AFCON) on Sunday night.

Mane led Senegal to beat Mohamed Salah-led Egypt in the 2021 AFCON final at the Paul Biya Stadium, Olembé, in Cameroon at the weekend.

The former Southampton star scored the winning penalty as Senegal defeated Egypt 4-2 on a penalty shoot-out following a 0-0 draw after 120 minutes.

After winning the 2021 AFCON trophy, Mane and his Senegal teammates celebrated.

On Monday morning, Mane posted a picture of himself with the trophy, while wearing his winners’ medal on Instagram.

The Liverpool number 10 posed in his bed alongside the trophy, accompanied with the caption: “Alhamdoulilah,” which translated to “Thank God” in Arabic.

Reacting, some of his Liverpool teammates, past and present, commented on the post to send their messages of congratulations to the 29-year-old.

Mane is expected to return to Liverpool later this week.