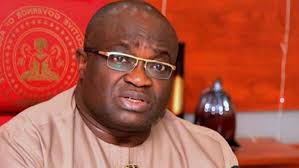 Gov. Okezie Ikpeazu of Abia has announced the release of a student of Abia State University, Uturu (ABSU), abducted on Wednesday night on the Okigwe-Uturu Road.

The student was abducted by hoodlums, along with other passengers in a Sienna Van between 7.00 p.m. and 8.00 p.m. on their way to Uturu.

On an official Twitter handle@GovernorIkpeazu, the governor “expressed joy over the development’.’

He vowed that he would surely take justice to those involved in the kidnap and would not share the state with criminal elements.

“I spoke with her (the student) and her mother minutes ago and want to thank God, our security agents and the management of ABSU for a job well done.

“Our administration has since taken measures to strengthen the security around the area where the incident happened and even beyond to ensure the security of lives and property.

“Security of lives and property remains my number one assignment as governor and it is one duty I will never take lightly,’’ Ikpeazu tweeted.

Meanwhile, gunmen on Sunday morning attacked the Mike Okiro Police Station at Ubani, near Umuahia, leaving one operative with a gunshot wound.

The Police Public Relations Officer (PPRO) in Abia, SP Godfrey Ogbonna, who confirmed the attack to NAN, said the incident happened around 9.00 a.m.

According to him, the command, working on intelligence report, relocated the operatives out of the station.

“But when they got wind of the attack, they returned and made frantic attempt to repel the assailants, unfortunately, one of them got shot in the leg,’’ he said.

The PPRO said that the bandits torched office furniture, files and other official documents, two police vehicles and two motorcycles parked on the premises.

He said the command had begun an investigation into the incident but that no arrest had been made.

Sunday’s attack brought to three, the number of police formations, including Uzuakoli and Nkporo police stations, so far torched by gunmen in Abia.

He also confirmed the arrest of two members of a five-member armed robbery gang in Aba, the commercial nerve centre of Abia.

He said the suspects were arrested on Saturday while their vehicle, charms and drugs were recovered.