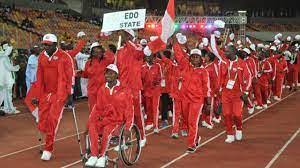 The torch of unity of the 20th National Sports Festival (NSF) on Monday morning began a tour of Edo.

It was reported that the torch will however only visit the headquarters of the state’s three Senatorial Districts, unlike how it was done previously.

Then, the torch had gone through all the Local Government Areas (LGAs) of the state.

The torch-bearers are being led by Sixtus Omokhagbor, an aide to Philip Shaibu, the Chairman of the festival’s Local Organising Committee (LOC), who is also Edo’s Deputy Governor.

Newsmen reports that other members of the team include Osagie Ohaimu, national record holder in the 21km walk race, and Faith Fidelis, an 800m and 1500m specialist.

The first senatorial district billed to be visited is Auchi, headquarters of Edo North.

There, the Head of Service (HoS) of the Etsako West LGA is expected to receive the torch on behalf of the other six LGAs in the district.

The torch is expected to move to Edo Central senatorial district where the HoS of Ekpoma, Esan West LGA will receive it on behalf of the district.

The last place of visit will be Edo South senatorial district, where it will be received by the HoS of Oredo LGA on behalf of the district.

Reports state that the torch named “Unity Torch” will be lit at the Samuel Ogbemudia Stadium on Tuesday by Vice-President Yemi Osinbajo, who will officially open the 20th NSF.

The 20th NSF, tagged “Edo 2020” and the country’s biggest sports event, began on Friday with the arrival of state contingents of athletes and officials.

It will end on April 14 with the departure of all the participants and other visitors.