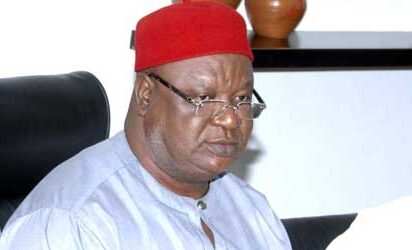 The Governor of Abia State, Chief Okezie Ikpeazu has endorsed the former Secretary to the Government of the Federation, SGF, Sen. Anyim Pius Anyim for President in the forthcoming 2023 general election.

Ikpeazu advocated the need to allow Igbos to produce the next president of the nation and vowed to galvanize support to ensure total victory for Anyim.

The governor made this known while addressing stakeholders of the southeast zone who followed Anyim to a consultation visit to the governor at his country home in Umuobiakwa, Obingwa Local Government Area of the state.

He described the former SGF as “a man whose public service credentials and experience are good enough for the Presidency of Nigeria”.

According to him: “What matters now is for the Igbos to be given a chance to produce the next Nigerian President”.

“No other tribe in Nigeria has demonstrated practical belief in the Nigerian nation better than the Igbos as can be seen from the fact that our people live and invest heavily in every part of the country,” he stated.

He added that by the virtues of Anyim to have served the country as the Senate President, SGF and currently a prominent chieftain of the Peoples Democratic Party, PDP, in the southeast, he deserves to be supported to become the next president.

Earlier in a remark, Anyim said he came to formally inform Ikpeazu and the party leadership in the state of his plans to contest for the presidency of the country in the forthcoming 2023 elections.

He said that the southeast is the most qualified zone in Nigeria to produce the next president based on equity and justice.

Anyim noted further that he decided to make himself available for the contest “after a careful analysis of my antecedents, experience, passion and wide contacts across the country.”

He called for the support of the governor and the party in the state, assuring that he would be a candidate and a president that Nigeria would be proud of.