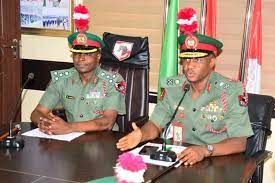 The General Officer Commanding (GOC) 2 Division Nigerian Army,  Maj.-Gen. Aminu Chinade has warned officers and men of the command against involvement in partisan politics as the country prepares for general election in 2023.

The GOC gave the warning on Tuesday during his familization visit to the Headquarters 4 Brigade Nigerian Army, in Benin.

“Remain apolitical in order not to dent your career;  whenever you are called upon during the election, you should remain neutral and apolitical.

“Maintain your professional ethics and shun any act of partisanship in the discharge of your duties,” he added.

The  GOC, who assumed duty on Aug. 12, said that the visit was for him to be  conversant with all the units under his command.

He commended the officers and men of the Brigade for their good conduct and professionalism, and extended the goodwill of the Chief of Army Staff, Lt. Gen. Faruk Yahaya.

“I want to commend you for your commitment and dedication from the brief report I got even before coming, I am encouraged with your behaviour.

“I also want to employ you to work closely with the host community, with a view to contribute to the security of the state and provide enabling environment, especially in this election period,” Chinade said.