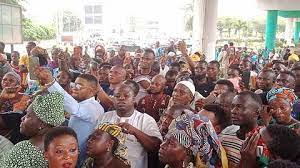 In an attempt to resolve the ongoing crisis among market leaders in Oyo state, about two million traders in Oyo state, on Wednesday, stormed the house of chiefs, Secretariat, Agodi, Ibadan to dialogue with the state lawmakers on ways to find a lasting solution to the long-overdue face-off among market men and women in the pacesetter state.

The aim of the gathering was pointed at a public hearing on a bill for a law to establish the Oyo State market leaders’ council and other matters connected therewith which was organized by the Oyo State House of Assembly Committee on Commerce and cooperatives.

Speaking with the Chairman, house committee on Commerce and cooperatives, Hon. Akintunde Olajide, said the proposed bill will address the lingering leadership tussle among traders in the state.

“This bill when eventually passed into law by this Honourable House would redesign the leadership council of markets, give it a new structure and also make it more viable in order to boost trading and business activities in our dear state.

“It is pertinent to note that in every society, it is very necessary to put specific people in the position of authority and responsibility in order to plan, organize, coordinate, lead and control activities of people. Hence, the need for good leadership in our markets becomes unequivocal. Putting good leadership structure in place would promote good and cordial relationship between government and traders in the state for development and good standard in our markets.”

Marketmen and women who bared their minds on the bill for a law for the establishment of the Oyo State market leaders’ council and other matters connected with, said it is a welcome development and promised to give their full support to the bill while noting that they have informed appropriate authorities on the gray areas of the proposed bill.

While explaining the bill clause by clause, the representatives of the Ministry of Justice, Trade and Commerce, local government, and chieftains matters, said the bill is in the right direction but some of its sections must be free of ambiguities.