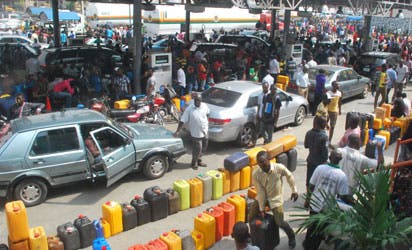 About a week now, the fuel scarcity which seems to be abating has taken the turn for the worst. The long queues started appearing at the filling stations across the country in September forcing the price of the petroleum products to jump from 180/litre to between 205 and 210 per litre among the filling stations owned by the independent marketers while some major marketers were selling for between 180 and 185/litre.

Many Nigerians have adjusted to this reality albeit reluctantly. Some were of the opinion that as long as the product is available, they are prepared to incur extra cost rather than waste their precious time queuing for fuel that they may still not get to buy at the filling stations across the country.

While people have taken it in their stride to get used to buying the petroleum product at these varying prices, the queues began surfacing again across the country. The biting scarcity has pushed the price of the petroleum to as high as between N250 and N300 per litre in most of the filling stations while those selling at the market sell for between N400 and N500/litre

At the heart of the current fuel crisis is the problem of subsidy, forex crisis all contributing to the non availability of the product in major oil depots.

A report said that by May 29 when President Muhammadu Buhari would be handing over to his successor, his government would have spent almost N11 trillion on petroleum subsidy. The scarcity of this essential product as well as the increase in its price is said to have been aggravated by the waning ability of the NNPC to continue to efficiently fund petroleum subsidy.

Some marketers who spoke to journalists on condition of anonymity alluded to the above scenario. They said PMS imports charges were becoming unbearable for the sole importer of the commodity — the Nigerian National Petroleum Company Limited, disclosing that the NNPC had been subtly pushing these charges to depot owners.

The depot owners, on their part too, have also been passing the charges to filling stations, which in turn pushes it to final consumers of the product, a development that has led to the increase in the pump price of the commodity.

This development, according to a report, was confirmed by the National Public Relations Officer of the Independent Petroleum Marketers Association of Nigeria, Chief Ukadike Chinedu, who stated that NNPC was currently finding it tough to continue subsidising PMS.

“The least that NNPC can sell petrol is over N400/litre to depots and not at N145/litre, but because of subsidy, which is becoming over-bearing on them, the oil firm has been struggling to subsidise,” he stated.

He added, “That is why you see the lapses. The government is looking for dollars to import this product and pay the contractors importing for NNPC, and it is also trying to subsidise PMS.”

Ukadike explained that the landing cost of PMS in Nigeria was about N450/litre, as he noted that subsidy on PMS was no longer sustainable.

“The government will not continue to be Father Christmas and cripple the economy. Subsidy must stop!” he stated.

The fear of removing this monster of petroleum subsidy that have since been eating a substantial fragment of the nation’s wealth has always been the reason why government has for a very long time been dragging its feet as regarding its removal.

Many have also argued that if the subsidy is removed, petroleum will also turn to just any other commodity that its prices is dictated by the forces of demand and supply. Given the role the petroleum plays in our daily activities, it is believed that removal of the subsidy will surely affect every facet of our lives and could aggravate the economic hardship many Nigerians are currently facing.

Nigerians are therefore of the opinion that, if only the government could bring our refineries back to life or build new ones such that this mineral resource that we have in abundant in the country could be refined here, then we would have won a major war of having to ship our crude oil to overseas refineries after which we then buy them back using a lot of forex that we don’t have.

It is believed that, the handlers of this country must conscientiously work towards solving this quagmire of not having refineries that could produce for Nigerians sufficient daily supply of petroleum products.

Many are of the opinion that, much as it is necessary for the government to end this obviously parasitic venture of subsidy regime, the government should as a matter of urgency prioritise construction of new refineries as this will save the country the trouble of having to refine its crude oil abroad which does not only create supply chain gap but also increase the landing cost of the product.

A financial analyst was quoted in a report to have said that, “It is definitely going to be in the interest of Nigerians if this subsidy regime replete with unfathomable corruption is overthrown because it has outlived its very essence and usefulness.

“It is now one major way through which the resources that the government ought to invest in our hospitals, roads, schools among others now find their way into private pockets, some of them are now billionaires, this madness must be stopped.

“However, it will be better if the country concentrates on having its refineries working. If Saudi Arabia, Qatar, and other countries of the world are doing it well, why not Nigeria? It’s really disappointing that none of our refineries is still working up to maximum capacity and this I think the government should please work on. It can then begin to phase out this bundle of corruption called subsidy. It might be hard for us to start with but it will eventually be for the good of the country, no matter the pain.”