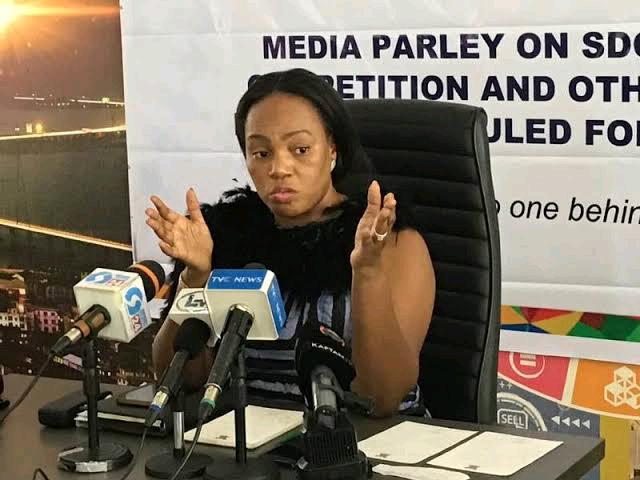 Lagos State Government (LASG) on Tuesday launched a much awaited platform tagged  ’Lagos NGO Directory’, for Non Governmental and Civil Society Organisations (NGOs and CSOs), to be incorporated into a database system to create a pivotal connective link between the Government and the “Impact Makers” working towards the actualisation of the Sustainable Development Goals (SDGs) 2030.

This is just as the Government unveiled the awaited Lagos SDGs Impact Grant Challenge Initiative to offer grants to Impact Makers including CSOs and NGOs to implement critical projects bearing key relevance to the actualisation of the SDGs in the State.

The synergistic move to create connective path with the NGOs and CSOs as Impact Makers, synchronised with a grant provision programme, stakeholders have described as laudable and epochal in the Country, a path they noted would form a pivotal vista in the trajectory to actualisation of the SDGs 2030 in Lagos.

The grant challenge is seeking projects that offer smarter, faster ways to make real progress on the 17 Goals of the SDGs.

It will award the sum of N5 million each to three winning ideas that targets each of the SDGs. In total, the grant seeks to fund 51 projects addressing SDG targets (3 projects per SDG) across Lagos state.

This competition will enable the State Government to create a broader-based collaboration with the CSOs, NGOs and social entrepreneurs who are already implementing solutions to achieve the SDGs, Special Adviser to the Lagos State Governor on Sustainable Development Goals (SDGs) and Investments, Mrs. Solape Hammond, disclosed.

Applicants who must have successfully pass eligibility screenings will be required to submit one project idea that addresses one of the 17 Global SDGs. The project must reflect a specific KPI, and an estimate of total people that will be impacted by the project.

Hammond, at the official flag off of the Lagos SDGs Impact Grant Challenge and the Lagos NGO Directory, said the initiatives were borne by the need to build strong framework to fortify the productivity of NGOs, CSOs and other Social Impact Ventures to execute vitalising projects towards the actualisation of the SDGs 2030 in Lagos.

According to her, the vision was conceptualised from the Governor Babajide Sanwo-Olu led Administration’s insight to align its policy thrust, the THEMES AGENDA, alongside the SDGs framework for measurable impacts in development process.

“After crafting the THEMES AGENDA that we are using to transform Lagos, we aligned it with the SDGs framework because we made it instantly communicable, globally relevant and very easy to measure and track. That was very important to us so that we could see our progress and be able to say where we are, and track measurable progress,” she said.

According to her, the Lagos State Volunteer Corp is a precursor that further gave insight into the strategic commissioning of the Impact Grant Challenge initiative.

“What we are trying to do with this project, the SDGs Impact Challenge, is to take that further, to bring together all the Impact Makers whether they are CSOs, NGOs, Social Impact Ventures, all those who are working and creating change around Lagos, to mainstream the SDGs.

“We are going to pick three projects across each of the 17 SDGs and work with them to implement these projects over a period of three months, bringing volunteers together to deliver on these projects.

“What that does is that it amplifies some of the good ideas that some of them have, and we all know that NGOs are very resourceful. They are doing a great thing with very limited budgets.

“It also helps in a very difficult environment such as the one we are in now, where resources are quite lean. We thought it was good to help the NGOs continue the good work they are doing, because if they don’t, we have people at risk of being left behind.

“A lot of NGOs are doing great work and its not recorded anywhere; it’s not measured. They are not even tracking what they are doing excellently. On this programme, we are going to track them, not just on their goals but on the specific KPIs that they’ve contributed to the target’s they are achieving; we amplify that and measure, so at the end of the day, we would have a very clear record of what is good; we have ideas of good practices, best practices that are evolving from Lagos.

“We have a lot of Lagosians coming together, working together to deliver on the goals, and of course, we have the support for Impact Makers Sector that we really want, and that connection with the Government,” Hammond said.

According to her, a precursor summit held by her Office in partnership with the State’s Ministry of Economic Planning and Budget to gather challenges of NGOs revealed information gaps between government and impacts making NGOs which according to her must be covered.

She mentioned that the challenges gathered from stakeholders informed the launching of the Lagos NGO Directory as a database platform for NGOs to connect with the government on its programmes and activities as well as “understand what the opportunities were in the Government.”

She mentioned such was pivotal to create a rallying platform for partners to be acquainted with government’s provision and plans.

“Really, all we are saying is this government cares for Impacts Makers and we know that we need that partnership to be able to deliver on the THEMES AGENDA and on the SDGs,” she said.

On the impact of the programme, she said, “To put it in context with the Volunteer Corps, today, we have had over 11,000 Volunteers, they’ve given over 5,000 hours and we’ve seen impacts on communities with clean ups; interventions in health, education, and every space you can image. So, you can imagine what would then happen with the Government and 51 NGOs alongside their partners working. It’s going to be phenomenal. I don’t think anyone can just estimate the impact this would have, so I would say watch this phase,” she said.

The Special Adviser charged Lagosians and Impact Makers to come closer to the Government, stating the Office works in “a framework telling the story of what you are already doing.”

“The SDGs are really not an esoteric phenomenon, it’s already just a framework that describes what you are already doing. It’s relevant to everyone, so I encourage you to embrace it, to look at the target and map out your own contribution to arrive at the SDGs successfully by 2030.”

Founder, Mind the Gap Foundation, Tayo Olosunde, said understanding the roles of SDGs is a vitalising roadmap to doing excellently in impact courses to sustainable development with strong structure for businesses and sound initiatives.

Commending the Initiative, Executive Director, Lagos Food Bank, Michael Sunbola, said  Lagos State through the Office of the SDGs and Investments has launched an epochal move in Nigeria through the Grant Challenge Initiative, stating it’s a good step to  trailing leading world governments.

He lauded the SDGs and Investments Office, hoping such initiative would be extended to other States in the Country.

The Permanent Secretary, Office of SDGs and Investments, Mrs. Abosede George, speaking on the development, said it would be difficult for the Office alone to achieve the mandate of the SDGs to meet the agenda 2030, hence informing the need to partner NGOs.

“We can’t do it alone and the way we can do it is to engage other organisation which have been working in other spheres. We know they have challenges. Some have financial challenges and some have projects on which they need support from the Government and that is why Governor Babajide Sanwo-Olu has decided to release funds to ensure we achieve the agend 2030,” she said.

On the credibility and fairness of the applicants’ selection  process, she said “the process is going to be very objective and transparent. We are going to do it the way it should be done. If we say criteria, then we have to go that route. We would encourage people to participate, and once you meet the criteria, you would be given, you don’t need to know anyone,” she said.