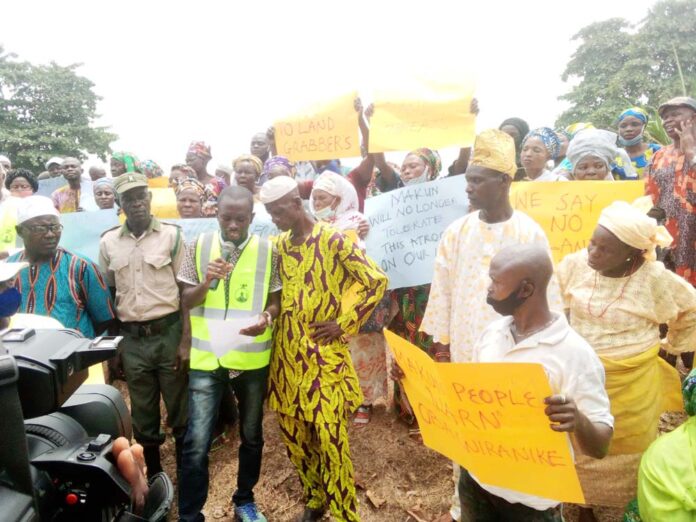 Residents of Makun community, Sagamu in  Sagamu local government area of the state, on Thursday took to the streets to protest the unwholesome act of some landgrabbers disturbing the peace of its over 40 villages. Some of the affected villages are Okerala, Kanuyi, Idarika, Ewu Lisa, Ipa, Alawun, Simawa and some of its environs.

The residents of the community led by their royal father, the Ewusi of Makun, Oba Timothy Akinsanya carried placards bearing different messages such as ‘Akarigbo save us from landgrabbers’ activities,’ ‘Gov Abiodun come to our aid, we don’t want landgrabbers anymore on our lands,’ ‘we want peace in Makun land’ among others.

Speaking during the protest, Hon. Adeyemi Kalejaiye, President of Makun youths said that the protest was to send strong signals to all the landgrabbers disturbing the peace of over 40 villages of Makun that enough was enough.

Hon. Kalejaiye said “specific mention must be made of one Oniraniken of Iraniken, Sagamu Oba Adewale Adeniji who is the brain behind all this crisis, he is the one taking over our land using landgrabbers to chase our parents out of our villages with gun and cutlasses.

“They have also been selling these lands at cheaper prices. We have been on this issue for about five years but we are now saying enough is enough. Gov Abiodun and our father in Remo land, the Akarigbo should please come to our rescue before this issue turn to avoidable crisis.”

Corroborating the stand of the youth President, Alhaji Jamiu Olododo, Chairman, Organising Committee of the peaceful protest said that the protest was to call for the intervention of Gov Dapo Abiodun and Akarigbo of Remo land, Oba Babatunde Adewale Ajayi as Makun indigenes could no longer tolerate the lawlessness of the landgrabbers being allegedly encouraged by Oniraniken of Iraniken, Sagamu, Oba Adewale Adeniji.

Alhaji Olododo warned that except something drastic is done to fight off the landgrabbers while also calling the Oniraniken of Iraniken, Oba Adewale Adeniji to order, people might be forced to defend themselves saying “our people are already tired of being chased about in their villages by the landgrabbers.”

Speaking at the Akarigbo palace, the Ewusi of Makun, Sagamu, Oba Timothy Akinsanya said that his people had always been reporting the activities of the landgrabbers to him but he had always told them to be patient with the belief that those involved would allow reason to prevail.

Oba Timothy Akinsanya said “but it is like my people are getting fed up because the traditional ruler in question and his people have refused to tow path of peace. They are therefore demanding for Akarigbo’s intervention so that this matter won’t escalate unnecessarily and of course peace will reign in all these affected communities.”

Reacting to their demands, the Akarigbo of Remo, Oba Babatunde Adewale Ajayi appealed to the protesters to give peace a chance saying that he would ensure justice is served over their request.

Oba Babatunde Ajayi explained that, though, he was not hearing about the issue for the first time but having heard from the protesters, he would also call the traditional ruler involved to hear from him and ask him to come along with necessary documents saying that he would ensure nobody is cheated over this matter.

The paramount ruler said, “I just want you all to continue to be patient and maintain peace, don’t resort to self help because it is easy to start a war but to end it might be very difficult. I will definitely call for the meeting of all the traditional rulers in Remo land for a way forward over this matter, if need be, we might set up a committee to help look into this issue but be rest assured that the matter would receive adequate attention.”

However, speaking with our Correspondent, the Oniraniken of Iraniken, Sagamu Oba Adewale Adeniji denied using landgrabbers to terrorise the residents of these villages or grabbing their lands saying that  the land under dispute is his family land which an high court sitting in Sagamu delivered judgement on in April 2018.

Oba Adewale Adeniji said that though some family members had also approached court to set aside this judgement, an high court had also in January 2020 ruled that the earlier judgement on this said land stays.

The traditional ruler disclosed that he remained a man of peace and would never do anything contrary to the provision of the law.