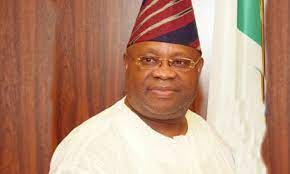 No fewer than 1,500 School teachers who were employed at the tailend of the immediate past administration have been sacked by Governor Ademola Adeleke.

It would be recalled that the immediate past Governor Gboyega Oyetola  administration had employed  1,500  teachers after the conduct of the Governorship Election which he lost to the incumbent Governor,  Ademola Adeleke.

However, the Osun State Governor on his assumption of office issued an Executive Order that nullifies the employment of  1,500 teachers that was hurriedly done by immediate past administration on of before July 17th, a day after the declaration of  Osun  governorship Election .

In a passionate appeal by the affected teachers led by Mr Owoyemi Abdulwasiu during a press conference held at Correspondent Chapel in Osogbo, urged the Governor to exercise restrain in disengaging the 1,500 teachers employed by his predecessor.

Abdulwaisu disclosed that the employment of the affected teachers followed due process just as he pleaded with the Governor to exercise restraint on disengaging them rather they should be  allowed  to continue their work which they have assigned to do.

“The order stated the nullification of 1,500 recently employed teachers made by the immediate past administration after July 17th Governorship election.

“We would like to plead to you to reconsider this order for the good people of Osun State particularly the 1500 newly employed Teachers for the Basic (Primary) and Post-Basic (Secondary) levels of Education in Osun State.

“The contributions of these Education Officers/Teachers towards the development of their respective Places of Primary Assignment and the State at large since assumption of duty as testified by Parents, Teachers and the Students alike are of no small measure,” he stated.

However, the Special Assistant to the Governor on community, Communications, Mr Tunde Busari said all illegally employed workers remain disengaged.

“Those engaging in demonstrations are APC members smuggled into the state payroll by former Governor Oyetola. By virtue of the Executive Order issued by Mr Governor, those illegally employed remain sacked and are no longer staff of the State Government. No amount of demonstration and blackmail can change that reality.”