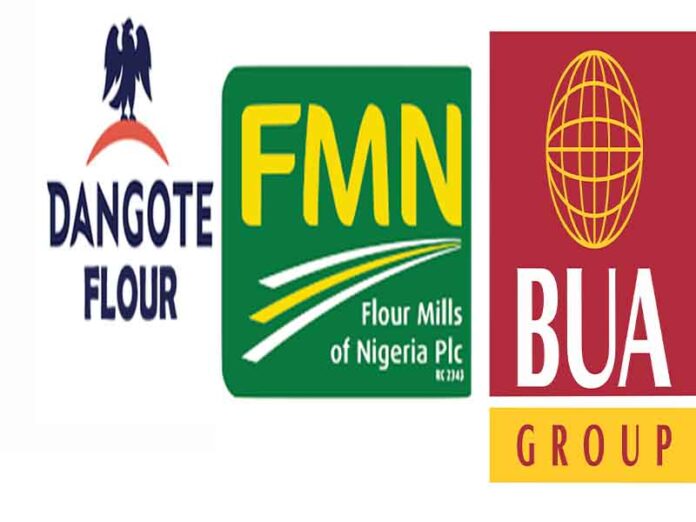 The Chairman, Dangote Industries Limited, Alhaji Aliko Dangote and the Chairman, Flour Mills of Nigeria Plc, Mr. John Coumantaros, have petitioned the Federal Government saying the activities of BUA Group especially the establishment of a sugar refinery by the group may circumvent the National Sugar Master Plan’s (NSMP) framework and jeopardize its objectives.

In a statement to Nigerian NewsDirect, the Group Managing Director of Dangote Sugar Refinery (DSR) PLC,. Ravindra Singhviin confirmed that the petition, dated January 28, 2021 and addressed to the Minister of Industry, Trade and Investment, Mr. Niyi Adebayo was to alert the government that establishment of a new sugar refinery plant in the country by BUA poses a threat to the attainment of the National Sugar Master Plan (NSMP) as well as sustainability of the country’s local sugar industry.

They argued that the country currently had enough refining capacity to meet national demand.

However, in the ensuing row among the major players in the industry, Chairman, BUA Group, Alhaji Abdulsamad Rabiu, said his investment in Port Harcourt did not in any way pose a threat to the country’s sugar policy, adding that it will rather checkmate arbitrary price increase by the major players among other benefits to the country.

BUA also warned that the Dangote group and the other major player have not been involved in any backward integration project, rather they depend on 80% raw sugar allocation which is detrimental to the Nigerian economy in long-term analysis. BUA on the other hand has been involved in a backward integration project with BUA’s Lafiagi Sugar BIP set to be completed in 2022.

Over 250million dollars is believed to have been spent on the export-focused BUA sugar refinery already and it is also employing over 1,000 Nigerians.

Meanwhile, BUA also noted that at the center of this fight to force FG to close the BUA Sugar refinery down is the price war.

“Last year, before Ramadan, sugar sold for around 18,000 Naira per bag. But as Ramadan fasting started the price jumped to 30,000 per bag. The people had no choice but to buy it because they needed a lot of it during the period. So the manufacturers were smiling at the bank. BUA group noticed the trend and decided that it had to change. There was no reason to increase the price during Ramadan simply because the demand is high.

“Usually, the increase happens about one month to commencement of fasting.

“When the other manufacturers got across to BUA, Samad Rabiu refused. They put pressure on him, saying it was the right time to make good money but he put his feet down.

“After failing to do that, they petitioned the Federal Government that he was breaking the law by selling sugar locally instead of for export.”

However, in the letter to the minister, Dangote and his counterpart in Flour Millis, argued that they had in 2019, warned about the risk of establishing a new refinery, adding that they got assurances that in line with the federal government’s policy on Backward Integration Programme (BIP), “no new refinery will be allowed to operate in Nigeria.”

They also pointed out that a tremendous amount of work was required by all stakeholders to achieve the intended objective behind the sugar policy, which is to among other things, encourage backward integration to ultimately attain self-sufficiency in local sugar production.

The petitioners further demanded for a level-playing field that provides fair competition in the local sugar market in order for the country to realise the sugar master plan.

They specifically urged Adebayo, to prevail on the Nigeria Customs Service (NCS) and the Central Bank of Nigeria (CBN) to ensure that the provisions of the NSMP were enforced and that no additional allocation of quota should be given for raw, VHP, or refined sugar for the sugar refinery in Port Harcourt for local market production.

Among other recommendations, they said no allocations should be issued or applications considered for quota intended for re-export of sugar as this would be difficult to monitor and may be open to abuse.

The petitioners added that, “An investigation should be conducted to determine the quantity of raw sugar imported by the refinery in Port Harcourt and the appropriate penalty in terms of duty (60 per cent) and levy (10 per cent) be levied on the company.”

It added that the customs should be mandated to comply strictly with the authorised quota allocations in clearing cargoes and administering levy and duty and that the CBN be requested to monitor the registration of “Form Ms” in line with the quota allocation.

They recalled that under the revised guidelines released by the National Sugar Development Council (NSDC), it was made absolutely clear that the allocation of quotas henceforth shall be on quantitative and verifiable improvements in the BIP of operators in the industry.

The petitioners alleged that the midterm assessment conducted by the NSDC had concluded that BUA had “failed to invest substantially in local production or comply with its undertakings under its BIP.

The petitioners maintained that the business logic behind the investment in new refinery was clearly defective adding that, “BUA intends only on importing and refining raw sugar whilst claiming to be investing in developing sugar plantations in order to qualify for quotas to import raw sugar.”

They further alleged that the Port Harcourt refinery was clearly undertaken to deliberately undermine the federal government’s sugar policy.

“We are particularly surprised by the brazenness as we believe that the choice of location and the publicity campaign behind the investment has been deliberately engineered to provoke public sentiment and pit the federal government against its people,” the petition added.

It said unless the ministry of industry, trade and investment plays an effective policing role of the NSMP, the country’s dream of becoming  self-sufficient and indeed a net expoter of sugar would be defeated.

“The impunity with which BUA has contravened the provisions of the NSMP has placed the other players who are abiding by the regulations, not only at a significant disadvantage but has discouraged them from undertaking the huge investments that would deliver the desired objective of 100 per cent local production of sugar, unless, of course, the ministry wades in and addresses the situation,” it added.

Meanwhile, Dangote group has refuted all the allegation leveled by BUA describing the claims and assertions in their entirety as the false and are geared at tarnishing the good name and brand of Dangote Sugar Refinery Plc and Dangote Industries Limited.

While responding to the enquiry by Nigerian NewsDirect last night, Dangote group said DSR does not engage in artificial price manipulation of its products, either during the Holy month of Ramadan or at any other time.

“We have never ever increased price of our food items or commodities during the Holy month of Ramadan in the history of our operations,” the Group Managing Director, Mr. Ravindra Singhvi told our Correspondent.

He also added that the Company is socially responsible and considers price-fixing to be unethical.

“Such allegation is highly mischievous and a calculated attempt to smear the reputation of DSR. DSR can only sadly conclude that the online publication is mischievous and geared at creating some form of undue advantage to some Industry players,” he said.

He added that the company began its Backward Integration Programme (BIP) with a 10-year sugar development plan, to produce 1.5 million MT per annum of sugar from locally grown sugarcane.

Similarly, he added that the Company had commenced rehabilitation and expansion of its Sugar Factory at Numan towards increasing production capacity by 6,000 tons of cane per day (TCD). Sugarcane planting has also commenced in two other BIP locations.