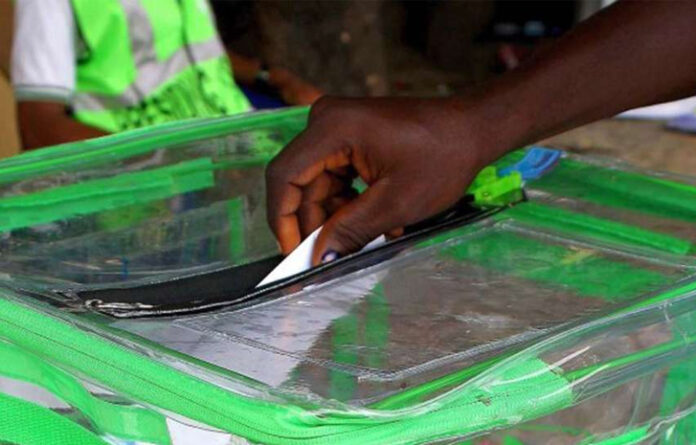 The grip of vote-buying on records of election in the Country has been of strong reflections. Recent elections have not reflected their records free from such grip. For instance,  the recent June 18 Governorship election in Ekiti was rattled with pronounced resonance of vote-buying, a strong factor among others, which formed critical part in the deficiency records that shrouded the election.  Reactions by authorities, saw the Economic and Financial Crimes Commission (EFCC), arrested some suspects, including party agents, for allegedly engaging in vote-buying. Reports from observers revealed some of the suspects were also said to have been caught at a private residence with bags of money with a book containing details of voters of certain voting areas.

With the fears over the grip vote-buying could have over the Osun Governorship Election,  calls on security agents to clampdown on such malpractice  have been on course. In response to the demand, the Nigeria Police Force and other security agencies, including the Nigeria Security and Civil Defence Corps (NDCDC) have declared their readiness to man the election with sufficient manpower to forestall any eventualities of vote-buying. It has been gathered that the deployment of police personnel will also be complemented by soldiers, the Civil Defence Corps, and the Amotekun Corp for the elections. Among others, for instance, the Police Force on its part has said it would deploy  the Federal Intelligence Bureau, Tactical Corps and the Special Forces to curb the election mal-practice of vote-buying. The Inspector-General of Police, Baba Alkali, at the Stakeholders meeting held in Osun State on Tuesday, 12th, July, 2022, had warned that the police would not take it lightly with persons or groups seeking to perpetrate vote-buying or any form of inducement in the Osun Governorship 2022 elections.

However, of critical concern is the demand to determine how far such security agencies could go in foreclosing the eventualities of vote-buying. This is particularly of critical concerns, as the transaction of such mal-practice may take diverse clandestine formats, and may not strictly be traded openly. Hence, it is pertinent to note that the subject of curbing the electoral menace of vote-buying is such calling for more elaborate necessities. While the role of such security architecture as the Federal Intelligence Bureau, Tactical Corps and the Special Forces of the Nigeria Police Force as well as those of the EFCC, have their roles to play for intelligence purposes, which cannot be downplayed in curbing the menace, it is pertinent that more than the force of security agents, appeals to actors, particularly the citizenry and political stakeholders are pertinent.

It is of note that the phenomenon of vote-buying is a transaction largely  involving two major actors – political actors and the electorates. Hence, caution on both sides of the actors become pertinent. Such caution on the part of the citizenry is very critical, as it has been emphasised that without vote sellers there would be no vote buyers.

The consequences of selling votes have over time created deficiencies around the profile of credible elections in the Country. In the larger spectrum, its impacts on governance have apparently borne troubles beyond the records of superficial effects. Calling public office holders to account becomes practically skewed where the processes that brought them in were never borne by the credence of intellgent and conscientious voting to bring-up credible candidate, but by the misplacement of order coming by vote-buying. Making public office holders accountable becomes negatively affected where the processes informing their emergence were largely borne by vote-buying. Under such circumstances, the grip of corruption becomes quick to sight and checking against such becomes a difficult necessity to uphold.

The need for citizens as electorates to break away from the repose on the syndrome of susceptibility to cheap inducement to satisfy immediate thirst is pertinent. Such syndrome has been connected to sacrificing good fortunes for short term thirst, a deficiency that cannot be unconnected to the grip of bad governance in the Country. Now that the grip of bad governance has thrown the Country into shambles of harsh conditions of living, the citizens have been on the receiving end, with excruciating plights.

It is pertinent for the Nigerian populace to become enlightened to the woes of vote-buying. It’s debilitating impacts have been such which transcend its immediate grip on electoral process, but with expansive force beyond the political processes, to debilitating impacts on the economy, the condition of living with deficient social, cultural and moral reflections among other fabrics of the Country.

The need for citizens to begin a resistance campaign against inducement by mischievous political elements has become a necessity to break away from a system that has defrauded and deprived them of good governance. Towards the most immediate Osun gubernatorial election fixed for Saturday, it is expedient for the residents of the State to adjust to a resolute stand of conscientious voting, against the susceptible disposition to inducement, tantamount to selling their future for immediate penny that may be equal to setting-in for another period of socio-economic hardship.

More significantly, it is pertinent for political stakeholders to conduct and compose themselves wisely, prudently, and nobly in the most honourable disposition, steering clear from inducing electorates with money. The demands of the suitable concern is for the most popular candidate to emerge winner with the strength of credibility. It is time for political stakeholders, particularly, contestants to live by the standard of playing by the rules, against relying on foul play. Such is the demand to act reasonably with caution testing the real strength of candidates. Imbibing this disposition towards the Saturday Governorship election in Osun would be a step ahead to sanity.

It is equally important for political parties to work in this orientation. In future terms, moving to field candidates who would meet the test of credible strength in contest is the salient way to go, against resorting to foul play. Redefining the internal requirements of their structures may be a part of the reformatting order political parties may have to effect in their development courses.

Go get your PVC now!