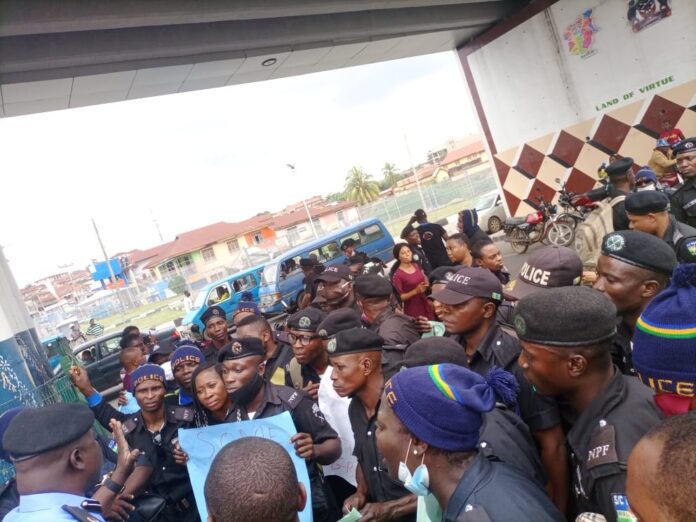 …’Okada riders are sleeping with our wives’

Personnel of the Nigeria Police Special Constabulary in Osun State, on Wednesday stage a protest in Osogbo, State Capital over non payment of 18 months salary.

The special constables stormed Oke-Fia and moved down to the popular Olaiya Flyover in Osogbo in protest, alleging that the government is owing them for 18 months.

The protesters complained that they have not been paid any salary since the completion of their training in May 2021.

Some of the protesters rode on motorcycles carrying three passengers each while others who dressed in black Police Uniform armed themselves with placards with various inscription such as ‘Pay our salary now,’ ‘Okada rider are sleeping with our wives,’ ‘Pay us our 18months salary,’ ‘pay us Our Stipends And Allowances,’  ‘18 month without kobo’ among others.

The aggrieved police constabularies lamented that tricycle and bike riders have snatched their wives due to their inability to take care of their wives and children.

Speaking with journalists, Constable Tijani Adewale who expressed his grief said despite the fact that they have not been paid they were really committed to duties saying no fewer than three Constabularies have lost their lives in the course of discharging their duties.

According to him, “We have gone to the Local Government, honourable and dignitaries  and yet nothing is done.

“We lost three persons in Ikire and one in Iree. These people died in the course of discharging their duty. We are very dutiful despite the fact that we have not been paid a dime.  Due to unpaid allowances, tricycle and Okada riders have snatched our wives because of inability to take care of them.”

Addressing the protesters, the Commissioner of Police, Adewale Olokode ordered them to stop the protest with immediate effect just as he assured them that the authority in charge would see to their matter.

“As far as you are wearing this uniform we expect you to maintain high discipline as Force men.”

Sanwo-Olu’s promise to youths is inclusion in governance — Commissioner