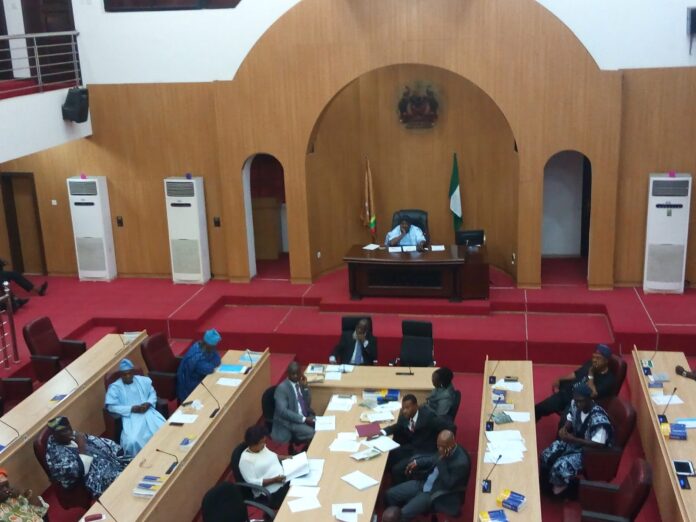 Osun House of Assembly has mandated six months ICT training for Civil servants from level seven and above working at the state Parliament for the effectiveness of their work.

The Speaker of  House of Assembly, Rt. Honourable Timothy Owoeye gave the directive while signing a Memorandum of Understanding (MoU) with a Non Governmental Organisation (NGO), Kimpact Development Initiative, on the development of E-Parliament portal for the House of Assembly.

Speaking after signing the MoU, Speaker Owoeye said that the seventh Assembly will use the parliamentary facilities to train and retrain the workers.

He further said that the workers working at complex will be trained on ICT from Monday to Thursday for the whole six months, adding that the house will monitor the workers through out the training period.

According to Owoeye, “As from now anybody from level seven and above will be subjected to six months rigorous training on ICT and we will like the Kimpact Development Initiative to partner with Osun House of Assembly.

“The 7th Assembly Legislative Agenda depends on the effective collaboration by all and sundry so at the end of the day the Legislative arm of government in the State of Osun would be better off.

“It will be recalled that shortly after the inauguration of the Seventh Assembly in the year 2019, a 6-point Legislative Agenda was developed basically to give direction and chart  the course of action for parliamentary activities.

“The e-parliament entails the use of internet services. telecommunications and Information Technology equipment and services and activities to enhance parliamentary transparency, accessibility and accountability.

“The ICT has proved to be a significant supportive and facilitative power for effectively fulfilling the duties and responsibilities granted to parliaments by the Constitution. In order to carry out the functions of legislation. And to enhance democratic practices and inclusive governance and thus bridge the massive gap and mitigate the weak relationship between the legislators and their constituents.

“I wish to commend the efforts of Kimpact Development Initiative (KDI) for partnering with the State of Osun House of Assembly in realising one of the key components of the 7th Assembly Legislative Agenda.”

Speaking, the Executive Director of Kimpact Development Initiative-KDI, Bukola Idowu commended the seventh Assembly for engaging hundreds of youth on any issue that has to do with the development of the state.

Idowu said, “The 7th Assembly passed the Osun State Youth Development Commission (OYDC) bill into law and subsequently signed into law by His Excellency, Alhaji Gboyega Oyetola, from which the youths of Osun would continually reap its benefits for years.

“It would be instrumental in strengthening citizen engagement, providing innovative ways to interact with citizens, and enabling their access to parliamentary proceedings and documents.

“We are confident that this e-parliament platform will be ready and launched by June 2022 with the timely collaborative effort of the OSHA.