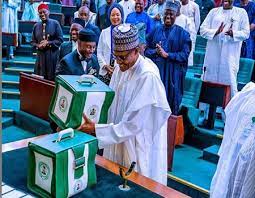 Recently, President Muhammadu Buhari presented the 2023 appropriation bill to the National Assembly. Record shows that N20.5 trillion (or $47.3 billion) was the proposed expenditure by the Federal Government to run the economy in 2023, which reflects the huge needs that exist in critical sectors of the economy. The proposed budget, which is 19% higher than the 2022 budget, is expected to take effect from January 2023 to address economic growth, fiscal sustainability, and security. The overall spending proposal of N20.51 trillion reduces to a non-debt spending proposal of N14.21 trillion, once the proposed N6.3 trillion interest payments is deducted from the overall the spending plan. In reality, it can be said that we do not have a N20.51 trillion spending plan on the table, but we only have a N14.21 trillion spending plan.

According to the Director-General of the Lagos Chamber of Commerce and Industry (LCCI), Dr. Chinyere Almona, the proposed revenue of N9.73 trillion does not reflect the country’s peak revenue performance of N6trillion in 2021, as it is unlikely that we are going to get that N6 trillion in 2022 for we reported only 1.6 trillion in the first four months.

“How we are projecting N9.73 trillion revenue in 2023 is, therefore, a mystery. Even if we are lucky enough to generate the N9.73 trillion, we must also discount the N6.3 trillion projected interest payments out of it, to leave us with a N3.43 trillion net revenue against the N14.21 trillion non-debt spending. This explains why the President is proposing a deficit of N10.78 trillion,” LCCI noted.

It argues that nothing is wrong with the N10.78 trillion deficit, but everything is wrong with the plan to issue N10.57 trillion, N8.8 trillion in new commercial loans and N1.77 trillion draw-down on bilateral and multilateral loans, new loans to finance the deficit, at a time that we are already placed on the watchlists of some of our foreign bondholders, and the world is still trying to process our President’s well-publicised call for debt cancellation at the last United Nations General Assembly in New York, United States of America. It is the exclusive use of debt to finance deficits that got the nation into the situation where we cannot keep the revenue we are earning today, as we use the bulk of our revenue to settle interest payments, and it is increasingly not enough to cover the interest payments.

In the 2022 year-to-April, the interest payments were more than the revenue, and it is most unlikely that the revenue would be more than interest payments in the full-year 2022 or even in 2023. The body alludes that it is comforting that the 2023 budget is still at the proposal stage and behooves all well-meaning stakeholders to make constructive inputs to the Presidency and the National Assembly by asking, “Can we consider more efficient alternatives to new borrowings? Can we issue equity to finance the deficit instead of using debt? Can we break from the path in which the Federal Government only approaches the debt markets at home and abroad and never approaches the equity market at home or abroad? Investors invest in debt. But, they also invest in equity. Our approach should not be to continue issuing only debt, especially with the increasingly unbearable burden of interest payments that exposes our fiscal vulnerably. Massive equity financing is the choice we should all urge the Federal Government to consider now.”

Nigeria should, henceforth, use equity financing as an exclusive way of funding budget deficits because if we embrace equity financing, we do not have to make huge interest payments, and we can use some of the proceeds of our equity issuance to pay some of down debt, to make the fiscal situation more sustainable and rekindle much-needed confidence in our economic and fiscal resilience. It is not too late to use equity to fund the 2023 deficit proposal. The current administration should be encouraged to take advantage of the equity choice to bequeath a legacy that the incoming administration can build upon as we find our way back to the path of fiscal sustainability as a nation, as LCCI commends the early transmission, consideration and signing of the federal budgets in recent times.

Just like in 2022, the Federal Government transmitted the 2022 budget to the national Assembly on 7th of October, 2021. The 2022 budget, titled ‘Budget of Economic Growth and Sustainability,’ valued at N17.126 trillion, was transmitted to the President by the National Assembly, on Friday, December 24, 2021. We expect to see an earlier transmission by the National Assembly and signing into law earlier than last year. It is commendable to note the strategic objective of the expenditure policy, which focuses on macroeconomic stability, human development, food security, improved business environment, energy sufficiency, improving transport infrastructure, and promoting industrialisation by focusing on Small and Medium Scale Enterprises (SMEs).

Beyond the figures and policy statements contained in the 2023 Federal Government budget, the chamber highlights seven key recommendations for implementation: call for an improvement in the performance of the 2023 budget by studying how the 2022 budget has performed so far, looking at what has worked well, what failed, and what must be corrected in the implementation of the budget; governments at all levels must put actionable policies in place to address high cost of fuels and food. The high rate of inflation would continue to distort most of the budget assumptions and targets if not curtailed while particular attention must be put on investing more on transport infrastructure in resolving the many logistical challenges that have impacted the movement of goods across the nation.

Aside oil revenues, the country can enhance its foreign exchange earnings through increased inflow of foreign direct investments, as “We need to invest more in infrastructure and critical port reforms to reduce the bottlenecks in our export logistics and processes that would boost non-oil production and exports; allocation of N470billion to revitalise the tertiary institutions and enhance salaries of university staff is commendable and at least, shows concern on their plight of the university community. However, we must accept that the current funding model for our universities is not sustainable in the face of the many revenue challenges being tackled by the government. A more sustainable way is to grant financial autonomy to the universities with a new emphasis on equity investments for infrastructure in addressing the most significant components of human development, urging the governments at all levels to remain consistent in funding education, health, infrastructure, and security.”

Furthermore, one-off funding cannot address the decay in these areas within a year. It must be a practice and tradition of seeking robust equity funding for these areas consistently. On a final note, it is can be said that it is obvious that the country not be able to source debts from foreign investors as in the past. Many factors have diminished such debt ratings, and this should push the government to consider immediate issuance of wholesale equity investment at home and abroad to fund idle assets to finance the deficits instead if borrowing more. The nation should immediately block revenue leakages by curbing oil theft, pipeline vandalisation, and trimming excessive fuel, power, gas, and forex subsidies as well as massive tax and duty waivers to lift revenue to N20 to N30 trillion thresholds from the present N6 to N10 trillion thresholds while expecting timely passage of the appropriation bill by the federal lawmakers.