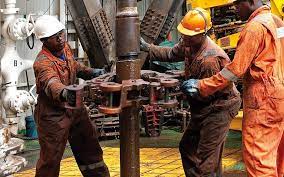 In the early part of President Mohammadu Buhari’s led administration, the complaint has always been that the oil price was low, accounting for relatively low economic development. Both apologists and critics of the All Progressives Congress (APC) government could not do much in refuting it.

Even when eventually there was rise in the price globally, our attention was shifted to theft in the industry. The situation almost became hopeless when the government of the day came out to say that 80% of oil daily production was going to “oil thieves.” Worse still, it was alleged that the remaining 20% was used in servicing debt.

In the midst of this controversy, the Chief of Naval Staff, Vice Admiral Awwal Gambo raised fundamental issues about the estimated quantity of crude oil stolen daily, maintaining that the figures given were unrealistic and outrageous.

The thieves remain unknown and their methods of operation not fully understood. What can be said is that the cartels are believed to be highly organized, sophisticated as well as being complicated.

Even now, the narration is changing. The Russian-Ukranian has brought about a boom in the energy sector. The energy prices have risen to an eight year high. The European nations have drawn policies, encouraged by multilateral organizations to address climate change impacts, including denying financing oil and gas projects, and tightened oil markets have all birthed the boom.

Like the saying goes, “one man’s meat is another’s poison.” As the high price is biting hard on non-oil producing nations, the OPEC members are smiling to their banks. Sadly, Nigeria, a member nation, has refused to join the party of beneficiaries.

The Organisation of Petroleum Exporting Countries (OPEC) approved a production target in  which we can no longer meet up today, instead of increasing our capacity. The fear of oil thieves has now become the beginning of wisdom, in that producers have to shut-in fields to mortgage theft. The high level operational network of the thieves, and the inability of the security agencies to curtail their activities have forced most international oil companies to move out of the creeks, while some other local operators have shut down production. This has made production to fall below 1 million barrels per day (bpd).

Our oil production fell from 1.08 million bpd in July to 972,000 bpd in August, with the shortfall of 112,000 bpd. The supposed “largest economy” now trails Angola (having 1.18 million bpd) and Libya (with 1.12 million bpd) on production volume according to the data released by OPEC.

In March this year, the Nigerian Upstream Petroleum Regulatory Commission reported in a presentation to Oil Producers Group, that the total value of Nigeria’s crude oil stolen between January 2021 and February 2022 was about $3.27 billion.

The reduction in the volume of crude drilled in the country is having a chilling effect on crude revenues, not forgetting that it serves as the major source of our income. This is even worsened by subsidy on refined petrol imported into the country, leaving a devastating effect on the economy.

All these are grave consequences of the mismanagement of our four refineries and the controversies surrounding subsidy and its removal.

Meanwhile, Gulf States (Gulf Cooperation Council), that comprises of United Arab Emirates, Saudi Arabia, Bahrain, Oman and Qatar have been projected to see a GDP surge of 6.1% in 2022 on the back of increased oil prices, as well as fiscal surpluses for the first time since 2014, as released by Mitsubishi UFJ Financial Group.

After six decades of oil production, Nigeria is still battling with how to get the oil out of the ground into pipelines and terminals for onward shipment abroad. The refineries are undergoing unending rehabilitation, loan facilitated.

The World Bank and the International Monetary Fund have always expressed worries over Nigeria’s continuous massive spending on petrol subsidy at the expense of investment in infrastructure.

President Buhari has replied that fuel subsidy removal was put on hold to ensure sufficiency in local refining, and to ensure wider consultations with stakeholders.

As much as we await earnestly the take off of production at Dangote Refinery, we hope we don’t fall a victim of monopolistic market. And if only the national refineries could be fixed in good time, so that the benefits of the oil boom will not elude us completely, as we know not when such “opportunity” is coming our way again.

It is time for the leaders in Nigerian Economy to unite across political parties for a lasting solution to the menace of oil theft in tackling, fuel subsidy fraud and bring an end to fuel subsidy. To achieve this recommendations, there must be proper tracking of oil liftings, blocking of porous inland borders and appropriate utilisation of oil revenue needed to reduce the suffering of Nigerians by the time the subsidy removal is reconsidered by President Buhari.