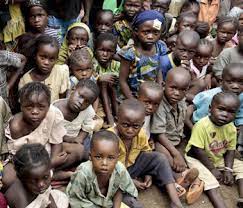 Eight-year-old Josiah, from Jiri community in Bassa Local Government Area of Plateau, has formed the habit of always crying when his mother, who practices irrigation farming, goes to the farm since his family relocated to Miango town after an attack on their village.

“I am always afraid when my mother goes to the bush in search of firewood and to water her plants. They (attackers) have killed my father and now they may likely kill her,” he says.

There have been violent conflicts in some communities in Miango and Kwall Districts, both in the North-Central state of Plateau in Nigeria.

The conflicts had always stemmed from disagreements and disputes between farmers and cattle breeders with the former often accusing the later’s cattle of destroying his farm while the later accuse the former of stealing his cattle.

Josiah’s father was killed in 2017 in an ambush when he returned to their home in Jiri to pick up some essentials for the family, shortly after they narrowly escaped on foot to Te’egbe, a nearby village, following an attack.

Josiah’s joy of having escaped with his family was, thus, short-lived and he currently suffers from psychological trauma with a permanent fear that his mother, like his father, may go out one day and won’t return.

He keeps recalling the day the family fled the village.

“We ran that fateful night with my mother and brothers, covering a long distance to seek refuge. I was so tired and got sick.

“Sometimes, I also dream of my brothers and I running in the night with sounds of gunshots trailing us.”

Teachers at Josiah’s school say he does not freely relate with other children which is common in children affected by violent conflicts, as they are traumatised and need special attention to help them reintegrate back into the society.

The violence has had far reaching and lasting effects on Josiah who has also suffered some set back in his education following the relocation to Miango Town.

His mother, a small-scale farmer, lost all her means of livelihood as a result of the crisis and is now overwhelmed with the pressure of trying to care for, and support, her children in a new community.

Josiah should be in primary school like his peers, but he is currently in nursery school because of the time lost trying to settle in a new community.

Grace, 10, another child who lost her father in 2021, lives in fear like Josiah.

The frightened girl says that she and her mother and brothers fear possible attacks in Kwasha, another community in Miango Districtt.

Her father was killed at a store when he stepped out to get some provisions for the family. The village had been surrounded by assailants, unknown to him.

Hear her: “My greatest fear is waking up and finding my mother and four brothers gone like my father.”

The stories of Josiah and Grace are typical examples of experiences of children in Bassa who are able to escape from deadly conflicts in their communities.

Their aspirations, even as Internally Displaced Persons (IDPs) living in host communities, are to have access to education, health services, shelter, food and an opportunity to earn a livelihood when they get older.

A recent report by United Nation’s International Organisation of Migrations says that there are 79,339 IDPs in Plateau, with 56 per cent of them less than 18 years.

Bassa has suffered the most with 73 episodes of violence from 2015 till date.

According to records at the Plateau State Peace Building Agency, within a few months, more than 3,000 children have been reported displaced in three communities in Miango District in clashes between cattle breeders and farmers.

This has caused set backs in children’s access to education, social interactions, health and general welfare.

Many children in such areas have witnessed gruesome killings of their parents or siblings in attacks usually executed in the night or early hours of mornings in their communities.

A family and child social care practitioner, Mr Victory Ogah, recently observed that helping children to realise their aspirations in conflict areas required concerted efforts by both government and the private sector.

“Their needs are substantial and too large for government alone to handle. We must all join hands to make it possible.

“The needs of the children in the region keep increasing as more conflicts are recorded in the area.

“The situation has drawn the attention of some Community Based Organisations (CBOs) who are providing interventions such as health outreaches, scholarships, cash for parents or caregivers and start-up grants for businesses, as part of efforts to cushion the impact of such conflicts and address their plight.”

One of such CBOs is the Voice of the Girl-Child which, under its “Quick Health Project”, has provided medical interventions, trauma counseling, food, clothing, matrasses, sanitary towels and toiletries to IDPs in Bassa.

The Executive Director of the CBO, Mrs. Mildred Bako, says that households from communities in the Irigwe Chiefdom of the Miango District have been benefitting from the programme since 2020.

“We also run some trauma awareness, counseling and healing sessions with more than 100 IDPs, comprising mostly women and children, benefitting,” she says.

Other organisations are leading the fight against child sexual exploitation in the region.

The Women Initiative for Sustainable Development (WISCOD), for instance, investigates the sexual exploitation and abuse of young girls in Bassa, including their coercion into commercial sex work.

So far, the organisation, which is supported by a US-based NGO, Mennonite Central Committee, has empowered 40 young girls by providing them with life skills to help them stay safe and healthy.

Several young girls and women have been trained by WISCOD to become tailors among other professions, and were given starter packs to establish their businesses.

The programme Manager of WISCOD, Mrs. Rabi Mudi, recently told newsmen that in addition to empowering the girls through skills-based education, the organisation is also focusing on improving the teenage girls’ self-esteem with a mentoring programme.

The girls attend monthly meeting with peer educators who help to advise them against engaging in commercial sex where they are even more vulnerable to physical violence.

Mudi says that the ongoing programme, which started in 2018, has been able to address 14 cases of child rape.

“These rapes result mostly from girls approached by men who promise to buy all their goods to relieve the girls from having to walk for miles to sell their items — in return for sex,” she says.

WISCOD offers the girls legal advice and refers them to healing centres while also raising awareness among young girls on how to report early signs of sexual abuse.

Faith-based organisations are involved in providing interventions for conflict areas in Plateau as well.

In 2020, the Cedar Tree Worship Center Ministry awarded scholarships to 38 children from Gashish District of Riyom Local Government. The scholarship covers their education up to university level.

The ministry is now offering the same scholarship programme to 56 children selected from various communities affected by conflicts in Bassa .

The study programme is a complete education package which includes the provision of uniforms, writing materials and school fees, amongst other items.

The long term intervention is designed to empower the children to become independent and ensure a secured future in their adulthood.

The senior Pastor of the Church, Dapar Bakzak, says that in addition to the educational intervention, 16 widows have been supported to generate income for their families in different businesses such as tailoring, catering and sales of food stuff.

“The tailors were given sewing machines, rented shops and the caterers were given what they need to continue with their businesses to help their families.

“Also, 36 widows not part of the 16 were asked to bring a child each, so we could support their education,” he says.

Dapar said that 500 households in Jebbu-Miango, one of the communities bedeviled by insecurity in recent times, were supported with food packs, toiletries and clothing, while efforts were being made to empower widowers with farming resources and tools to facilitate some level of self-sufficiency.

Great as the interventions in Bassa may sound, child experts fear that they may not be sustainable as more funding is required to cater for the enormous needs of the increasing number of displaced children .

They observe that many of the interventions are usually short term solutions which address only the immediate needs of the children and recommend adopting long term measures to help children flourish into happy, healthy adults able to access a good standard of living.

Child experts observe that children affected by conflict can be dehumanised by the violence and remain psychologically affected as they face an increased risk of becoming victims of child trafficking, labour and abuse.

Girls are particularly vulnerable to teenage pregnancy and sexual exploitation.

Community leaders in Irigwe Chiefdom have equally expressed concern that many displaced children, especially orphans living in their communities, are involved in drug abuse as a form of escapism from depression resulting from traumatic experiences.

Mr Gado Dama, a community leader in Jebbu Miango, has also complained that many organisations visit their village to take children to cities with the promises of giving them better lives but end up exploiting them through child labour practices.

“ Recently, an NGO from Kaduna came with a representative impersonating as a cleric to assist in the enrollment of children to school, but we discovered that he took them to a village in Kaduna and engaged them in hard labour at construction sites.

“The good news is that we were able to retrieve them and returned them home,” he explained.

Dama, however, regretted that two girls under 15 years died in a car accident on their way back.

Analysts, while acknowledging the efforts of NGOs toward offering children affected by conflicts the support they need, have pointed out that much more must be done to address their plight.

To further address the situation, child experts have called for a revamp of child welfare units at all levels where alternative care support could be provided.

They have also suggested the need for a proper reporting system for children affected by conflicts to offer government and private bodies the data required for effective management of the situation.