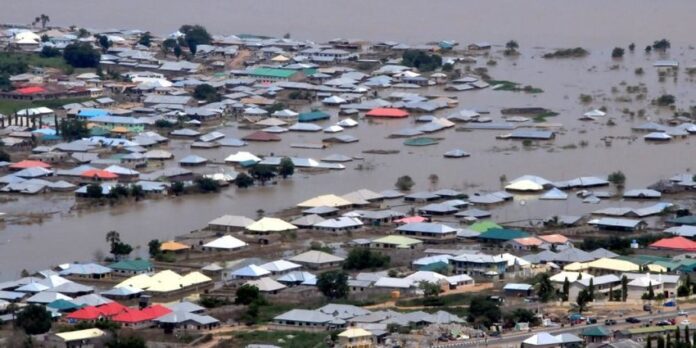 Flooding is the excesses of water on the surface of the ground when it rains. Normally, such lands are dry lands, until there is rainfall, particularly, when there is only a small portion of land to absorb the water.

Perennial flooding is one of the most prevalent natural disasters in Nigeria. The increasing annual flooding in some states has become a source of worry to the government at all levels and even the citizens.

Though, the extent and nature of Nigeria’s flooding are such that the actual figures for displacements, losses and fatalities cannot be ascertained due to poor records and reporting.

Most of the flooding cases in Nigeria are human induced with poor urban planning practices and inadequate environmental infrastructure.

Many residential areas have no drainage system, relying on natural drainage channels. Urbanisation involves building with concrete, thereby preventing the soil from absorbing water, which leads to increasing runoff.

Another factor that causes flooding is citizens’ poor attitude to waste disposal. Some municipal authorities lack effective disposal services. And, in areas where they’re available, residents deliberately evade patronizing the service providers, choosing to throw their waste into the drainages whenever it rains, causing obstruction for free flow of water.

Again, unregulated urban expansion without commensurate provision of urban infrastructure and amenities results in flooding. Agricultural lands are converted into residential areas to accommodate housing needs of the teeming urban dwellers. Houses are uncontrollably built on natural floodplains and storm water paths. The town planning officials too are not helping matters, as they look away from defaulters after collecting bribe.

Furthermore, heavy rains, swollen rivers and dam releases worsen flood situation. For example, the Lagdo Dam operators in Republic of Cameroon have commenced the release of excess water from their reservoir since 13th of September. Kainji and Jebba Dams have started spilling excess water from their reservoirs. All these have serious consequences along the courses of Rivers Niger and Benue.

Flooding threatens sustainability for its negative effects on the economy, health, social life and the environment. It has constituted in no small measure a threat to Nigeria achieving the global sustainable development goals.

Happily, unlike some other natural disasters, rainfall flooding can be controlled with proper planning and provision of necessary infrastructure.

To tame this menace, drainages must be put in place where they’re absent, and non functional ones to be rehabilitated, after which there must be periodical cleaning by removing the refuses, including the solid waste that may block easy waterway. Canals are to be constructed to complement the drainages. These are artificial outfall drains known as water channels, to accommodate water from the drainages.

Both government and nongovernmental organizations should intensify their awareness crusades on the need to dispose our waste properly. When refuses are disposed into drainages, it may solve the problem temporarily. However, in the long run, it creates a bigger problem in that the vast accumulation of those dirt causes water drainage pipes to get blocked, and because water has to move, everywhere gets flooded.

Excess water from flooding in the city can also be converted into dams. The agency in charge would make sure that the dams are dry enough and ready to receive more water in the next wet period, because a filled dam is of no use when it rains.

Another measure to be taken is planting of trees, called afforestation. Nigeria is one of the countries that is losing its trees on the land. Water dries up faster and easily because trees absorb a lot of water. Rather than reducing the number of water absorbing agents, more should be added to their team.

Just like a piece of land is fenced, rivers should be fenced, to avoid the heavy outpouring of its content. This is what is known as “levees and dykes.” It obstructs the flow of river water into low lands, thereby preventing damage to life, agriculture and infrastructure.

Our Flood Management Policy, which is the legal and policy framework put in place to control and manage flooding should be activated. It’s not enough to concentrate on post-disaster  flood response. Prevention they say is better than cure.

As long as works exist, rains and rivers will get full. Rain is a good gift of nature, but when it is not channeled properly, it can cause serious havoc.

The government has been doing a lot to warn people of potential flooding places, it is important also for citizens to adhere to the rules guiding the purchase of lands and erecting of structures on it.