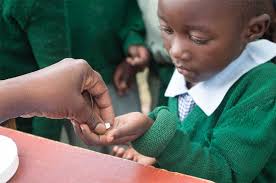 The Federal Government has launched the 2022 campaign against Soil Transmitted Helminthiasis or worms in Cross River.

The campaign is a school based deworming exercise for children between ages five to 14 to complement the Home Grown School Feeding Programme, (NHGSEP).

Farouq, represented by Mr Chogudo Sule, a Director in the ministry, said that in achieving the goal of proper nutrition in the NHGSEP, the ministry was partnering with the Ministry of Health to educate children across the nation.

She said that while the ministry of health and partners would be deploying their expertise in the campaign, FMHADMSD would provide support in advocacy, mobilisation, sensitisation and training at state and LG levels.

“In an effort to achieve maximum nutritional benefits through the NHGSFP, governments across all tiers have mobilised and deployed a nationwide deworming exercise.

“The exercise is with particular emphasis on the pupils benefiting from NHGSFP to access the free deworming medications together with the free meals,” Farouq said.

Dr. Janet Ekpenyong, DG CRSPHCDA also administering a worm expeller to a pupil during the exercise.

Ekpenyong said that Soil Transmitted Helminthiasis affected children in so many ways and could prevent them from absorbing vitamin A as well as other nutrients.

“Globally, about 1.4 billion people are affected by worms,this shows how common this problem is among people. So, Cross River is not taking it lightly as it is commencing the exercise in nine most endemic LGAs and spreading to the 18.

“Children would be given mebendazole tablets in schools, worship centres and other places. But parents can also visit health facilities with their children to get this drug as it will be made available there too for free.

“Parents should be rest assured that the drug is safe and for the best interest of their wards,” she said.

Also, Mrs Veronica Mark, State Coordinator of Neglected Tropical Disease (NTD) said the state was no longer doing a house-to-house treatment for worms after an assessment showed that it was no longer necessary.

Mark added that to totally eradicate the disease, they concentrated on schools in the state to ensure that children were dewormed.

A parent, Mrs Felicia Ekpo, who spoke to Newsmen said she was happy with the commencement of the programme in her children’s school, adding, ”it showed that the government was thinking about them.”

She called on all parents to avail their children the opportunity to be dewormed, adding that the drug was safe for the children.