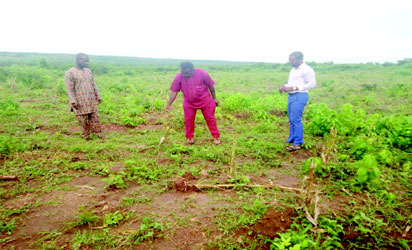 Some farmer groups in Bida, Niger, have lauded the Federal Government  and International Fund for Agricultural Development, Value Chain Development Programme (IFAD-VCDP) for exposing them to Good Agricultural Practices (GAP).

The groups applauded the programme during  the Mid Term Review (MTR) visit by the IFAD-VCDP to their processing and aggregation centres, on Saturday in Bida Local Government Area of the state.

They said the gesture enabled them to increase their yields and income as well as improve the living standards of their families.

The Director, Yegborolo Rice Processing Centre in Bida,  Hajiya Hajara Mohammed said the cooperative society had been in agri-business for over 25 years without tangible improvement until the intervention of the VCDP.

She said the VCDP exposed the group to GAP and agri-business, adding they were also taught on modern techniques in rice production, processing and marketing.

“We thank the FG/IFAD-VCDP because they made us realise our dreams in agri-business.

“This is why we want the VCDP to continue supporting us to improve our agri-business. The VCDP opened our eyes to agriculture,” she said.

“The FG/IFAD-VCDP built this modern cassava processing centre without demanding any money from us,” she said.

She said the VCDP also trained members of the group on agricultural financing, literacy and conflict resolution as well as introduced modern cassava production, processing and marketing skills.

“We have nothing to say than to thank the FG/IFAD-VCDP for their kind gestures because they have improved our agri-business and our lives.

“If possible, we want the intervention to continue to support us,” she said.

Similarly, Hajiya Aishatu Mohammed, Secretary, Alowo Cooperative Society, said the FG/IFAD-VCDP supported 13 cooperatives made up of 134 members to set up Rice Aggregation Centre to enhance preservation of the produce.

“The VCDP provided 90 per cent of the cost of the building and we contributed 10 per cent.

“This aggregation centre will not be possible without the support of the VCDP,” she said, adding the programme assisted them to improve their agri-business thereby increasing production and income to uplift their families.

She also thanked the VCDP for organising workshop to train the groups on nutrition and leadership.

Mr Guy Kemstop, IFAD-VCDP, Infrastructural Engineer from Rome, expressed satisfaction with the activities of the various farmer organisations, saying that producers, processors and marketers have proved themselves beyond doubt.

“We are really satisfied with what they are doing. We are happy to see how the IFAD-VCDP has impacted positively on the lives of our farmers and their families,” he said.

Kemstop said that more support from the VCDP would depend on government policies.

Earlier, Dr Mathew Ahmed, the State Programme Coordinator, IFAD-VCDP, said that part of the MTR visit was to ensure that the groups meet international standards in rice and cassava processing.

“You can see that today small scale processors are upgrading their mills to ensure that there are no black spots on their rice.

“We have also linked them to the certification agencies such as the National Agency for Food and Drug Administration and Control (NAFDAC) and the Standards Organisation of Nigeria (SON) to ensure good quality.

“Today the product of our farmers compete favourably with what you have in the international market,” he said.

The  project initiated in 2014 began implementation in March 2015 in Niger.

The project expected to wind-up in December 2019 had been extended to December 2024 with VCDP-Additional Financing (AF) due to its successes and large number of beneficiaries.

VCDP is being implemented in collaboration between the Federal Government, IFAD and nine participating states of Anambra, Benue, Enugu, Ebonyi, Kogi, Niger, Nasarawa, Taraba and Ogun.

It is aimed at addressing the constraints along the rice and cassava value chains.