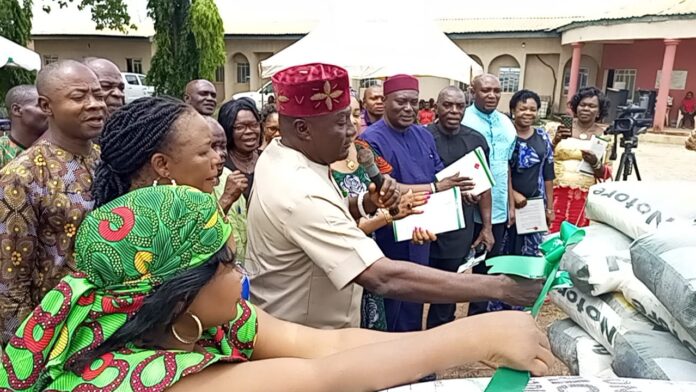 The State Programme Coordinator of IFAD-VCDP, Mr Sunday Ituma disclosed this during the presentation of the inputs in Abakaliki, noting that it was under the Rural Poor Stimulus Facility.

Ituma said that 258 farmers would receive two bags of NPK fertilisers, one bag of Urea fertiliser and one bag of 50kg seedling each.

He noted that the remaining 112 farmers would only receive seedlings but not the other inputs.

“The programme targetted the female gender from the benefiting local government areas with 80 per cent of the beneficiaries being women and 20 per cent, men.

“The beneficiaries have been duly profiled and captured in the programme’s data base.

“We would ensure that the inputs are not diverted by the farmers and monitor the usage till harvest period to ascertain the impact on crop yield,” he said.

The programme’s National Coordinator, Dr. Fatima Yusuf, said that the intervention was to cushion the effect of COVID- 19 on farmers in Nigeria.

“2,793 vulnerable VCDP farmers will receive agro inputs to support their farming activities as the programme will also provide extension services to targeted farmers,” he said.

The state Commissoner for Agriculture and Natural Resources, Chief Moses Nome described IFAD-VCDP as the bedrock of agricultural development in the state.

“One striking feature of IFAD operations in the state is the engagement of the ministry of agriculture in all its activities.

“This is the reason for the immense support the government gives it as the only thing we don’t offer it is what we can’t afford,” he said.

Mrs Rose Mbam, one of the beneficiaries, thanked the programme for the intervention and assured that the inputs would be judiciously utilised.

The goodwill messages were delivered at the occasion by the Federal Ministry of Agriculture and Rural Development, state agricultural development board, among others.