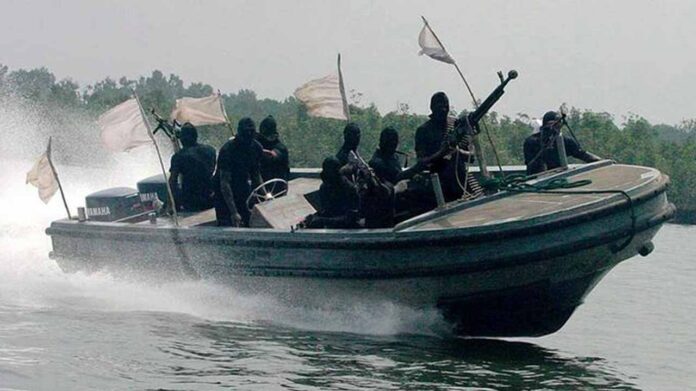 Months after Nigerian Maritime Administration and Safety Agency (NIMASA) had announced the launching of $195m Deep Blue Project, the presence of pirates is still being felt. This is even foreign navies had announced their presence in Nigerian waters, with two out of the three navies helping to thwart what would have been another major maritime threat.

It was gathered that the pirates ambushed their unsuspecting victims in Okoroma and Ogbokiri-Akassa communities of Nembe and Brass Local Government areas of Bayelsa.

The Deep Blue project, since its conceptualisation, was meant to secure Nigerian waters up to the Gulf of Guinea area.

The project has three categories of platforms to tackle maritime security on land, sea, and air. The land assets include the Command, Control, Communication, Computer, and Intelligence Centre (C4i) for intelligence gathering and data collection; 16 armoured vehicles for coastal patrol; and 600 specially trained troops for interdiction, known as Maritime Security Unit. The sea assets include two Special Mission Vessels and 17 Fast Interceptor Boats.

However, on the 27th of October, 2021, a Russian Naval Destroyer, Vice-Admiral Kulakov, foiled what would have been another maritime security threat in Nigerian waters when she helped scare away pirates who had already boarded a container vessel, MSC Lucia, at 86 nautical miles Southwest of offshore Agbami Oil Terminal. The pirates fled the ship through the aid of a small speedboat when they saw a Kamov Ka-27PS helicopter, which had been dispatched by the Vice-Admiral Kulakov, approaching with sea soldiers.

Again, on November 25, a Danish warship, Esbern Snare, was conducting an operation protecting shipping routes in the Gulf of Guinea when it spotted a fast-moving vessel carrying eight suspected pirates near a number of commercial ships.

“After the Danish frigate fired warning shots, the pirates opened fire on the Danish navy special forces, who in turn shot and killed four pirates and wounded one. The remaining four pirates were taken on board the frigate, and no Danish personnel was hurt in the incident. It was the first time the frigate had opened fire during its current mission in the Gulf of Guinea,” the Danish military said in a statement.

NIMASA, after the shooting of four pirates by the Danish warship, issued a statement, saying the agency was fully collaborating with international partners to fight maritime crime.

Dr. Jamoh assured that all stakeholders were interacting, adding that the Agency will continue to do everything within its powers, including collaborations, to ensure the Gulf of Guinea remains a safe place for virile maritime activities.

“Let me assure you that NIMASA is in contact with the Nigerian Navy and relevant actors, as we continue to collaborate towards a total de-confliction, not only in our waters, but also in the Gulf of Guinea,” he said.