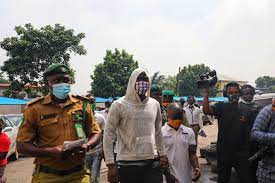 Reports said that James had pleaded not guilty on arraignment on Thursday.

In her ruling on James’s bail application, the judge said: “Defence has said that the defendant is a golden fish who has no hiding place and there individuals including a legal practitioner and family member who are ready to stand surety on his behalf.

“I have considered the case before me, there is no doubt that the defendant is facing serious charges.

“The most important factor is the ability of the defendant to attend trial. The right of bail is a constitutional right and is contractual in nature.”

Taiwo held that one of the sureties must be James’s blood relation with credible proof of the relationship.

She added that the blood relation must be resident in Lagos State and must provide proof of three years’ income tax payment.

The judge said that the second surety must be a lawyer who must swear to an affidavit of means.

“Bail must be perfected within the next seven days,” the judge ordered.

She adjourned the case until July 26 for substantive hearing.

According to the prosecution, the defendant committed the offences in 2013 and 2014 and on April 19 at Iwaya, Yaba, Lagos State.

“On April 19, he indecently treated and sexually assaulted the complainant, now 14 years’ old, by sucking her fingers and touching her in a sexual manner.

“He also attempted to have sexual intercourse with the complainant by unbuckling his belt and unzipping his trousers after sexually assaulting her,” Lead prosecution counsel, Mrs Olayinka Adeyemi, said.

Adeyemi is the Lagos State Director of Public Prosecutions (DPP).

“We are urging this court to grant this accused person the privilege as guaranteed under the Constitution.

“Imagine if this man is kept in detention for many years and is found innocent, will there be any restitution? No.

“Justice and fairness should be done,” he said.

Opposing Dada’s submission, the DPP asked the court to deny the defendant bail, saying that he would be a flight risk.

“I want to bring to my lord’s attention the nature of one of the offences – sexual assault by penetration – which carries life imprisonment.

“Bail is a discretionary right, it is not a constitutional right.

“On the nature of the offences and the strength of evidence, there is a prima facie case before your lordship,” she argued.