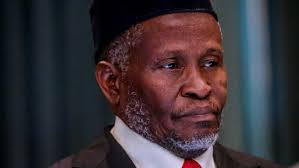 The Chief Justice of Nigeria (CJN), Justice Tanko Muhammad has asked the newly sworn-in acting Chief Judge of the Federal Capital Territory (FCT), Justice Salisu Garba to always be transparent and uphold their oath of office.

The CJN who gave the charge on Wednesday while swearing-in the new acting Chief Judge urged him to double his efforts to meet the demands of his new office.

He advised Garba to give his best in the new task given to him with a view to moving the nation forward.

“We must not rest on our oars if we are truly desirous of attaining new heights and conquering seemingly difficult situations.

“As the head of the FCT judiciary, we expect nothing short of the best from you. The buck stops at your desk and you must always be honest enough to be dispassionate in handling all issues before you”, he added.

Muhammad, who expressed confidence that Justice Garba will function well in his new office, also urged him not to be tempted to violate or desecrate any fraction of the oath he had taken.

He charged the acting Chief Judge to be of, “Good character, just as he has always been.

“Endeavour to consistently hoist the banner of honesty and integrity, hold aloft, the mantle of transparency and dispassionate disposition”.

The CJN called on Justice Garba to inspire confidence in his subordinates and also present an ideal image of a father-figure.

Newsmen reports that President Muhammadu Buhari had approved the appointment of Justice Garba as acting Chief Judge of the FCT following the retirement of Justice Ishaq Bello on Tuesday, Jan. 5, having attained the mandatory retirement age of 65 years.

Justice Garba will be in acting capacity pending the confirmation of his appointment by the Senate as the substantive Chief Judge.