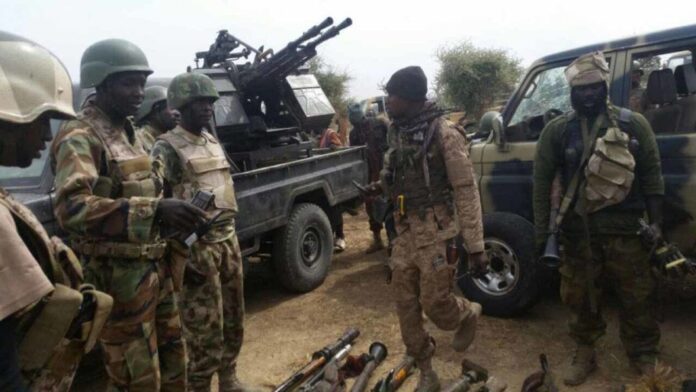 Effrontery of armed groups launching attacks on security operatives is growing to become a common phenomenon, recently, in the profile of insecurity narratives in Nigeria. From operations of bandits, terror insurgents, to those of local gangs of hoodlums, attacks on security formations and operatives have been taking toll with affronts which reveal loss of fear for the constituted forces of the Nigerian State. Last Friday, (26th November 2021), it was reported how the Divisional Police Officer (DPO) of Fugar Division in Etsako Central local government area, identified as Ibrahim Ishaq, was kidnapped near Ise river along the Auchi –  Ekperi-Agenebode road, Edo State. The police officer was reportedly travelling with his orderly, Friday evening, when they were attacked by the kidnappers. While the DPO was kidnapped, his orderly reportedly escaped. Following the sordid happening, the abductors on Saturday morning reportedly demanded a sum of N50million to secure his release.

On Thursday, (December 02), three drivers were arraigned before an Ikeja Magistrates’ Court in Lagos, upon charges of beating a police Inspector, Egwum Sunday.  The defendants – Isiaka Toheeb, 24; Saheed Nureni, 29; and Taoheed Adeniyi, 27 – are facing a two-count charge of conspiracy and assault. The prosecutor, Insp Mojirade Edeme, told the court that the defendants and others at large committed the offences on October 26, 2021, at Mile 2, Apapa, Lagos State.

Onslaughts of such, reflecting embarrassment on force agencies have become a common reoccurring incidence of note, as Police officers are increasingly falling prey to assaults by aggressive groups across the Country. The phenomenon is known to have assumed heightening dimension particularly, since the #ENDSARS protests which occasioned mob attacks against Police infrastructures and personnel. It would  however, be a prejudice to limit such onslaughts to the Police force, as other security operatives, even to the Nigerian military, have not been spared recently from such assaults.

Increasingly, attacks on the military have moved beyond the shore of insurgent onslaught to assume more recurring formats. On Wednesday October 14, 2021, no less than five soldiers were reportedly killed in an attempt to repel an attack by bandits on travellers in Zamfara State. It was reported the bandits who were operating to abduct motorists on a road leading to Gusau, between Kucheri and Wanzamai in Tsafe Local Government Area of the state, descended on the soldiers, carting away their guns and ammunitions.

Much earlier in October, it was reported that two soldiers were killed and 12 others injured in an attack by suspected bandits in Kagara, the council headquarters of Rafi Local Government Area of the State. The gunmen were reported to have gone on an operation in the palace of the emir of the town, to abduct the monarch who was reportedly absent during the attack.

On Saturday, September 11, 2021, at least, 12 military officers were reported dead in Zamfara State, following an attack on a military base. It was gathered the bandits had attacked a military base at Mutumji, Dansadau, about 80 kilometres south of the capital, Gusau, at about 10:30a.m. The attack recorded 12 fatalities, comprising nine Nigerian Air Force officers, two police officers, and one Nigerian Army soldier.

On Saturday, July 24, two Nigerian Army personnel, Bello Abubakar and Oyediran Adedotun, were reportedly abducted by bandits on the Maiduguri – Damaturu highway, in the Goni Masari area of Borno. According to a wireless message sent by 29 Task Force Brigade, the soldiers were kidnapped on the said date while travelling to Kano, in a civilian vehicle around 5:07p.m.

It has become mind-boggling that the rising affront against security architecture is heightening with wild effrontery. The question many Nigerians would ponder on is, if security operatives have become prey of kidnapping, assaults and killings to armed groups, what lies before the armless citizens? The need for strong architectures of firm response to be deployed with formative strategies to tackle the rising phenomenon of insecurity which has grown to the height of careless confrontation against the security architecture in the Country, which in many instances have been recording the submerging of security formations, has become alarming. Such effrontery amounts to nothing but direct attack on the Nigerian State. It has become instructive for the Government not to take too lightly with docility the rising threats. The time to act decisively and forcefully with strategic promptness is now!