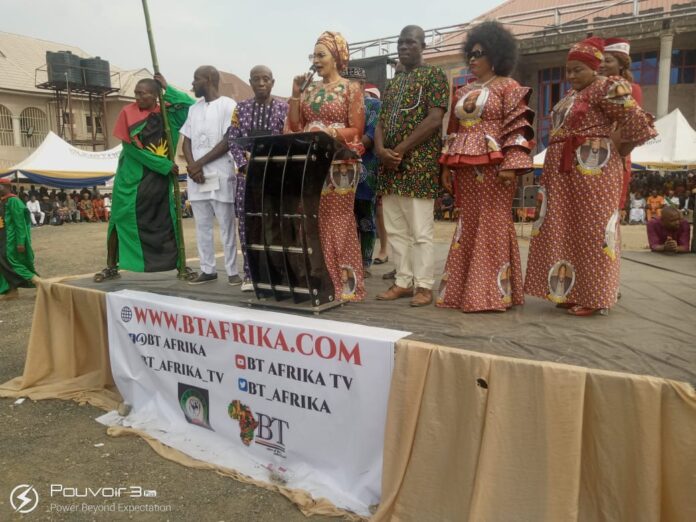 Ahead of 2023 general elections, Her Excellency Ambassador Bianca Ojukwu has advised Ndigbo ethnic nationality to be wise in their voting as their choices will either make or mar their opportunities for quotum leap towards economic, social and political emancipations.

Ojukwu who’s the wife of late Dim Chukwuemeka Odimegwu Ojukwu, ikemba Nnewi, the Biafran warlord and leader of the Igbo ethnic nationality said this in Owerri over the weekend during the 11th Memorial  Lecture of the heroic but deceased  husband organized and financed by the leaders and members of Movement for the Actualisation of Sovereign States of Biafran, MASSOB and Biafra Independence Movement, BIM, at Ojukwu Memorial Library, new Owerri.

While calling on Ndigbo to hold themselves responsible in 2023 for their woes noting that it’s a situation like the phenomenal 2023 that great men like her husband would be remembered for their boldness, courage and patriotism of saying the truth and crusading against social injustice.

She likened Igbos to crab that eat it self and described the nation Nigeria as a failed State in all socioeconomic indices.

The Nigerian former Ambassador to Spain expressed dismay on the level of marginalisation of the people of South East geopolitical region in Nigerian projects especially in areas of appointments, economic policies and infrastructural development.

Ojukwu who was persistent in saying that Nigeria system has totally collapsed called for immediate release of Mazi Nnamdi Kanu as pronounced by the nation’s judiciary.

She called Chief Ralph Uwazuruike of BIM/MASSOB as governor general of Igbo land and thanked him for always remembering her husband.

The political icon recalled that her husband had so many children but most of them she said are political opportunists noting Uwazuruike as an outstanding son with patriotic zeal.

Ojukwu informed that the last and greatest wish of her late husband has been achieved, that’s building of Prince  Bruce Marock memorial building which is in the memory of the 17 year old European boy who during the Nigerian/ Biafra civil war burnt himself to death at the front building  of   United Nations Secretariat as a strategic means of drawing global attention to the alleged gruesome murders, genocide killings, rapes  and marginalization of the minority Biafrans by the well equipped  and majority Nigerian military government then.

She predicted that Igbos are on a crucial journey to achieve their paradise and no forces on Earth can stop them from achieving their covenant with God saying” no nation that ever holds her people into hostage, will never have peace and that no nation that holds up the dreams of her citizenry will ever prosper and no force nor forces can ever stop the emancipation of the Igbos” she assured.

Earlier, in his speech, Mr. Fanny Amu who chaired the occasion poured encomium to Ojukwu whom he described as a peaceful Patriot.

Amu enjoined Igbos to tow the line of peace in all their endeavors as a means of sustaining Ikemba Nnewi legacies.