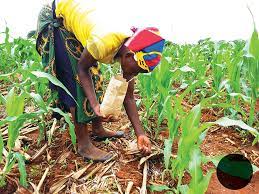 The government also approved N9.8 billion for the construction of township roads.

Adamawa Commissioner for Information and Strategy, Dr Umar Pella, told newsmen shortly after the State Executive Council meeting on Thursday in Yola that government was determined to support farmers in the state.

“The procurement order is to make the commodity accessible, available and affordable to farmers across the state.

He recalled that the Federal Government had banned the use of solid fertilizer in Adamawa, Borno, Gombe and Yobe states for security reasons, adding that the ban was still in force.

He said that N9.8 billion approved was for the construction of 2.2 kilometer township roads in Mubi South Local Government area (LGA); 4.8 kilometers in Demsa, other roads in Lamurde, Guyuk and Yola North LGAs.

“Also, among the major road construction works approved include the dualisation of Ahmadu Bello way in Jimeta, Abattoir road and Bekaji road.

“There is also construction of embankment protection of Chochi Bridge in Yola South Local Government Area; and work in Gashaka Street in Jimeta,” he said.

Pela said that the road contracts, awarded to Triacta and two other companies, would be completed within one year.