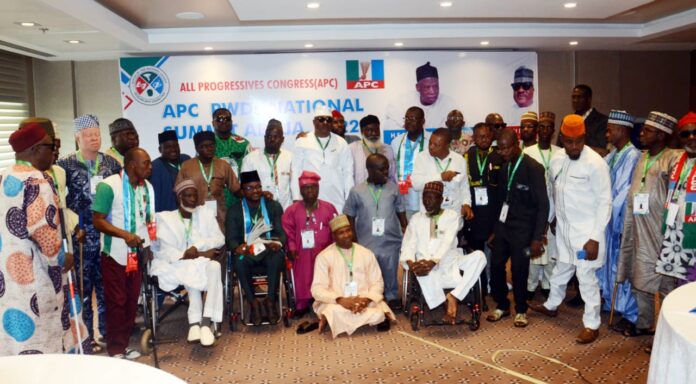 A group of Persons With Disabilities (PWDs) has promised the All Progressives Congress (APC) their unalloyed support by delivering an unprecedented 25 million votes to ensure a landslide victory of the party.

This was contained in a communique issued at the end of the maiden edition of the national summit for state, zonal, and national leaders of the group held in Abuja recently.

At the National Summit which is a platform to amplify the need for fair and equitable inclusion of PWDs in all the 36 states of the federation including the FCT, after extensive deliberations resolved amongst other things to set up all inclusive PWDs campaign structure to the polling units level, to work for the victory of the APC presidential ticket; Asiwaju Bola Ahmed Tinubu and Senator Kashim Shettima; Governors and other candidates of the party.

The group affirmed that going by statistics, there are over 30 million people with disabilities in Nigeria and they are ready to woo them in favour of APC.

“With 25 million votes from PWDs, we resolved to set up all inclusive PWDs campaign structure to the polling units level, to work for the victory of our presidential ticket; Asiwaju Bola Ahmed Tinubu and Senator Kashim Shettima; our Governors and other candidates of our party.

“To achieve this, we ask that PWDs must be involved in all the campaign structures of the party at the national and various states by setting up PWDs directorate to accommodate the peculiarities of the PWD community.

“We agree to set-up PWDs Campaign Council for Asiwaju Bola Ahmed Tinubu/Shettima 2023 immediately, to ensure victory, knowing that APC is for Nigerians and Nigerians are for APC.”

The group equally resolved to write to the Independent National Electoral Commission (INEC) to know the correct data of PWDs voters and pleaded to INEC to extend the continuous voters registration exercise to prevent the disenfranchisement of eligible PWDs voters.

They also used the occasion to commend President Muhammadu Buhari for the infrastructural revolution of his government and for holding PWDs in high esteem.

“We appreciate the special place our hero, President and Commander in Chief of the Armed Forces of the Federal Republic of Nigeria, President Muhammadu Buhari, GCFR played to ensure that PWDs gain its prominent status as guaranteed in the Discrimination Against Persons with Disabilities (Prohibition) Act, 2018 when he signed the law. The PWDs reckoned that the President’s infrastructural revolution in the country is historic and history will be kind to him.

“Like Oliver Twist, we call on our dearest President to complete his love for PWDs by appointing PWDs as Minister, members of federal boards and parastatals in his cabinet to finally put a nail on the coffin of discrimination, stigmatisation and rejection of PWDs in Nigeria.”

The summit passionately appealed to the conscience of State Governors who have not domesticated the Discrimination Against Persons with Disabilities (Prohibition) Act, 2018 to bequeath an enduring legacy to the PWDs community.

“Also, we emphasized that Nigerians must understand that disability is never by choice, and nobody is immuned. We are PWDs either by birth, negligence by our parents and guardians, accidents, war, age, disease and epidemic.

“Moreso, we appeal to our Governors, who are the leaders of the party, to give PWDs leaders in the Zones and States listening ears in order to fulfill their mandates of political, economic and social inclusion of PWDs in APC.”

Speaking on insecurities ravaging the country, the group urged every stakeholder to be security conscious as security is a joint responsibility of every citizen.

“On insecurity in Nigeria, we reject the drums of dooms and wars by merchants of instability. Nigeria’s security is the collective responsibility of all Nigerians. Enough is enough, this beat of war must stop, we in the PWDs community will not dance to it.”

The National Summit therefore charged all PWDs leaders to carry along women and children as a matter of priority. As part of efforts to achieve this, they resolved to create a directorate for women and children with disabilities to give them a sense of belonging.

Lack of finances to oil the activities of PWDs at the state/zonal/national levels was identified while urging the party’s hierarchy at the national and states to support PWDs with mobility to achieve the daunting task ahead of campaigns.

It was noted that the National Disabilities Commission has done so much for the PWDs community and those in the APC are willing partners of the Commission to reach more PWDs in Nigeria.

“We resolved to stand by his leadership and appealed to all leaders to shun anti-party activities.”