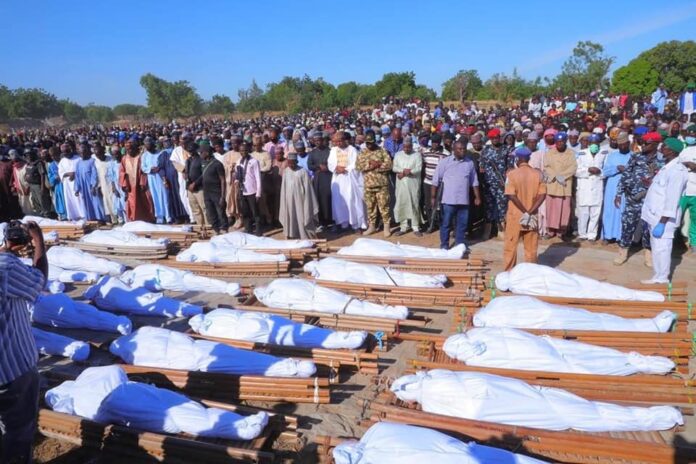 Killing of scores of rice farmers in Zabarmari village, Borno State, by armed insurgents on Saturday has further heated a polity seated on burning pot of coals. The reactions which have trailed the ugly happening have been more of distasteful sensations. The actual numbers of the slaughtered rice farmers who were all beheaded have  remained itself a subject of controversy as reports continue to account for higher numbers than the reported. However, while many continue to mourn the ugliness of the happening, the Presidency on Monday took a position that left more confusion to the brewing stage of acrimonies. The statement which has sparked wide outcry, is the position of the Presidency that the reported 43 farmers that were killed by Boko Haram did not have military clearance to be on the rice farms when the attack happened. The Senior Special Assistant to the President on Media and Publicity, Garba Shehu in an interview with the BBC on Monday, said: “The government is sad that this tragic incident has happened. 43 or thereabout of innocent farm workers, most of them had their throats slit by a heartless band of terrorists. People need to know what it is like in the Lake Chad Basin area. Much of those areas have been liberated from Boko Haram terrorists but there are a number of spaces that have not been cleared for the return of villagers who have been displaced. So, ideally, all of these places ought to pass the test of military clearances before farmers or settlers resume activities on those fields. Not exactly, but the truth has to be said. Was there any clearance by the military which is in total control of those areas? Did anybody ask to resume activity? I have been told by the military leaders that they had not been so advised and certainly, therefore, it was a window that the terrorists exploited. The military is not present in every inch of space in that area. Even if the people are willing to go back, a lot of those areas have been mined and mine clearance needs to be carried out and those areas must be cast as being OK for human habitation or agricultural activity.”

Amidst the clouds of anger that the unguarded statement gathered, the Peoples Democratic Party (PDP) in a statement signed by its National Publicity Secretary, Kola Ologbondiyan, said it was outrageous for the Muhammadu Buhari Presidency to claim that the farmers were beheaded because they failed to get clearance before going to their farms. The Party berated the statement, saying it is “also an admission that the Buhari administration has been overwhelmed by terrorists and can no longer guarantee our compatriots a normal life.” The Party further decried that it is a shame that the Buhari Presidency has graduated “from making bogus claims of having degraded terrorism to the embarrassing point of blaming unprotected and helpless Nigerians for falling victims of terrorist attacks.”

The statement read partly: “Our party submits that it is weird, reprehensible and repulsive that the Buhari Presidency now seeks to turn itself into a mouthpiece of terrorists by this subtle attempt to rationalize the killing of innocent and hard-working Nigerians. This unpatriotic stance smacks of support for acts of terrorism and mindless killing of our compatriots by a government whose Commander-in-Chief had promised Nigerians to lead the battle against insurgents from the front. Our party is forced to hold that attitudes such as the unpatriotic remark of the Buhari Presidency embolden insurgents in their ceaseless attacks in our country. Such also provides further insights into the escalation of acts of terrorism in our country in the last five years. This, to say the least, is the height of leadership failure of the lazy, lethargic and incompetent Buhari administration. It is therefore insensitive for the Buhari Presidency to have shown this huge lack of empathy, which amounts to a spit on the grave of the slain as well as an unpardonable slap on the faces of the generality of mourning Nigerians. Perhaps this also informs why their party, the All Progressives Congress, APC, has not deemed it fit to have a word of lamentation for the death nor consolation for the bereaved.”

It is pathetic that the Nigerian government is grossly insensitive to the principles of owning responsibilities in the light of liberal democracy. Not accepting realities of shortcomings have been a major bane which have characterised the present administration. The tradition of always shifting blames to others in the face of gross failure, is an unhealthy posture that is irrational to the principles of meaningful governance perceptions. While overarching records of political and economic shortcomings have continued to generate strains weakening the fabrics of the entire Country, the recent resort to blaming slaughtered farmers for farming for ends-meet is a clear hara kiri and a height of absurdity. In as much as the Government continues to push blame on others on every calamity from its ineptitudeness and laxity, rather than owning up responsibilities, it will continue to become more feeble and unpopular to address pressing national  problems by realities.

It is up to every good-intentioned government to accept its weakness and seek forward for help on how to build and galvanize energies towards such debilitating hit-points to avoid catastrophic consequences. It is however, absurd and a show of gross insensitivity when a government only has to blame others for its failures. The slaughtering of agile farmers eager to make ends meet by unlawful adventures, is a sad story full of horrendous sensations. The position of the Presidency blaming them for not securing permit to farm within the area is entirely a show of sadistic insensitivity and intolerable excuse for failure to ensure adequate security against what it promised Nigerians during electioneering campaigns into office. It is grossly saddening that against the pseudo claim by the Government that it has suppressed insurgency in the North-East, terrorists activities have moved from the region to establish their roots in other parts of the Country.

It is now glaring that the present administration is confused in the face of multiple socio-economic cum  political struggles destabilising the entire polity.  Rather than blaming others for failures, it is essential for the present administration to accept its feebleness, and seek for necessary help. Insurgency has continued to render the systemic workings of affairs off balance across board in the Country. This calls for acceptance on the part of the Government with the perceptible posture to look into how better prevailing troubles can be addressed by seeking help from the proper channels. The entire Federation is bleeding from strains of injuries and disturbances and the Government cannot afford to keep on feigning to be upstanding, while crumbling in isolated valleys of inertia; rather it should not be ashamed to cry out for help.

2023 elections: Peace accord and  matters arising

Menace of flooding in Nigeria