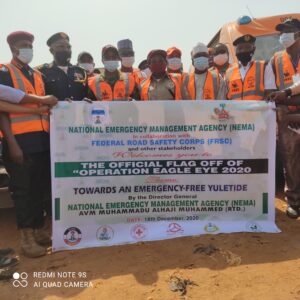 The National Emergency Management Agency (NEMA) on Friday inaugurated an initiative it called “Operation Eagle Eye” in Abuja to sensitise road users to the need to observe safety measures during the yuletide.

During the inauguration, NEMA Director General Muhammadu Muhammed, said the initiative was aimed at enlightening road users and ensuring strict enforcement to traffic rules and regulations.

Muhammed, who was represented by Air Commodore Edward Adedokun, Director, Search and Rescue, NEMA, said that the theme for this year’s exercise would be:  “Towards an Emergency Free Yuletide”.

According to him, the need to prevent road accidents and ensure prompt intervention on the highway led to inaugurate the initiative.

He said that the NEMA would position men and equipment for quick response to accidents before, during and after the yuletide.

“Road traffic injuries are among the leading causes of death and life-long disability globally.

“The World Health Organisation (WHO) reports that about 1.24 million people die annually on roads, with more than 50 million people sustaining non-fatal injuries.

“In Africa, the number of road traffic injuries and deaths have been increasing over the last decades. Nigeria has not been left out of these unfortunate scenarios.

“The recent road crash at Akaeze, Ebonyi in September that claimed more than 30 lives is still fresh on our minds.

“In August, no fewer than 19 people died in a fatal road traffic crash on the Funtua-Gusua Road. Furthermore in November, two other persons lost their lives and more than 20 vehicles were burnt when a fuel tanker exploded on the Kara Bridge on Lagos-Ibadan expressway.

“These unfortunate incidents on our roads bring to fore the need for road users to be careful at all times and adhere to all safety measures and all hands must be on deck to ensure emergency-free road usage,” he said.

In his view, Dr Onimode Bandele, Director, Relief and Rehabilitation, NEMA, said the exercise which was done in collaboration with other agencies would continue for two weeks.

Oyeyemi, represented by Deputy Corps Marshal Ojeme Ewhrudjakpor, also appealed to Nigerians to quickly alert the corps for prompt response whenever they come across any accident scene on the roads.

“Our toll-free emergency number is 122, please call us for quick response, as we rely on you all for information in cases of emergency,” he said.