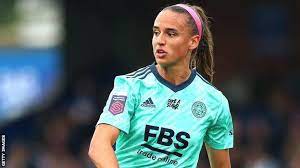 Plumptre is now expected to be sidelined for the remainder of this year.

The 23-year-old took to social media to thank her fans for their support, stating that she is fully focused on returning to the field of play.

“Minor injury but fully focused on the return in the new year
Thank you to the fans who continue to turn up, show up and support.

Words are words, I know, but the shared passion is there,” she tweeted.

Plumptre has made 14 league appearances for the Foxes this season.