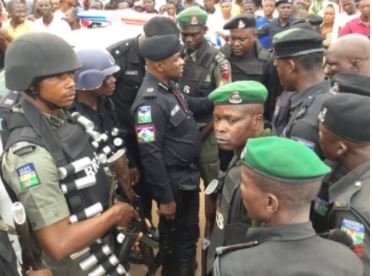 A 32-year-old trader, Ene Ayuba, on Monday appeared in an Upper Area Court in Zuba, FCT, for allegedly slapping a police officer.

The police charged Ayuba, who resides in Gwarinpa Village, Abuja on two counts of criminal force and assault on public servant while performing his lawful duty.

The prosecution counsel, Chinedu Ogada, said that the defendant committed the offence on Oct. 4, in the cause of investigation and interrogation in a case of assault against Ayuba in Gwarinpa police station.

Ogada told the court that Ayuba violently slapped the Investigating Police Officer, Sgt. Gwatana Friday while performing his lawful duties, for no reason.

The prosecutor said that the defendant slapped the police officer in the presence of her landlord, Mr Aminu Maji, Joseph Samuel, and some other persons.

The offence, he said, contravened Section 267 of the Penal Code.

After the charge was read to Ayuba, she pleaded not guilty.

The Area Court Judge, Alhaji Gambo Garba, admitted the defendant to bail in the sum of N500, 000 with one surety in like sum.

Garba ordered that the surety must be a GL 10 officer in the Civil Service and must reside within the court’s jurisdiction and verified by the court’s police.

He adjourned the case until Nov. 9 for hearing.