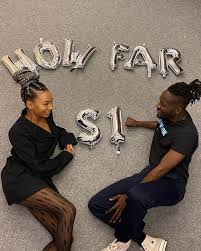 Billionaire businessman Femi Otedola has jokingly asked his daughter Temi Otedola and her superstar boyfriend, Oluwatosin Ajibade also known as Mr. Eazi when they will be getting married.

Temi on Tuesday announced that she will be launching a podcast with Mr Eazi soon.

He also referred to her with the name ‘Moremi’, the role she played in ‘Citation‘, Kunle Afolayan recently released movie.

Temi, 24, has been in a romantic relationship with Mr Eazi since 2017.

The podcast is called “How Far” and will launch this Friday, November 20th.

Temi made the announcement on her official page saying,

We started a podcast!!! Me and the Don @mreazi new podcast – HOW FAR – launches this Friday. You’ll be able to listen to our weekly conversations via Apple Podcasts, Spotify, Youtube and anywhere you listen to podcasts. It’s about to be madness….