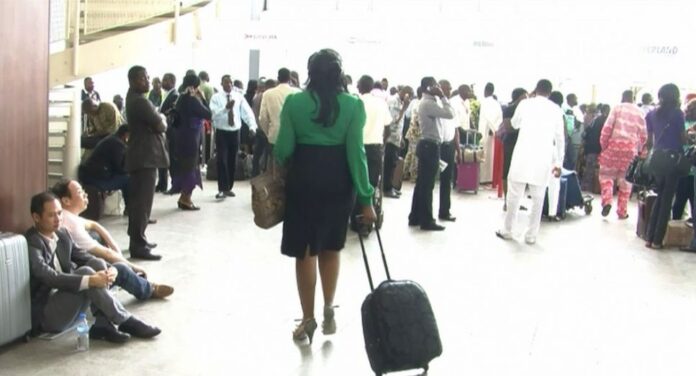 Reports coming from the Nnamdi Azikiwe Airport has revealed that passengers are stranded following flight delay by Air Peace.

Investigations by Nigerian NewsDirect revealed that some of the affected flights include Abuja to Lagos flight scheduled(P47122 P47123, P47127) and Abuja to PortHarcourt flights(3pm and 7pm) respectively.

A passenger who spoke to Nigerian NewsDirect decried that she has been at the airport since 11am but she has been waiting for the airline to board.

“I arrived at the airport by 10am to board my flight to Lagos by 11am but on getting here,the flight was delayed without prior notification.”

Another Passenger who is enroute PortHarcourt described the event as ridiculous stating that the mob is ready to fist it out with the security officials.

Another passenger enroute Lagos, Williams complained of the flight delay stating that this is the last time he would be flying with AirPeace.

Emmanuel,an AirPeace passenger enroute PortHarcourt said, “I have been at the airport since 3pm. At first they moved the flight to 7:10pm from 4pm but as at the moment we don’t even have an idea wha t is going on.

“I have been here since 8am for my flight but it was shifted to 11:45am and then moved to 7:10 tonight as the workers here said the planes were being maintained and later on they said the plabes on ground are not enough.”