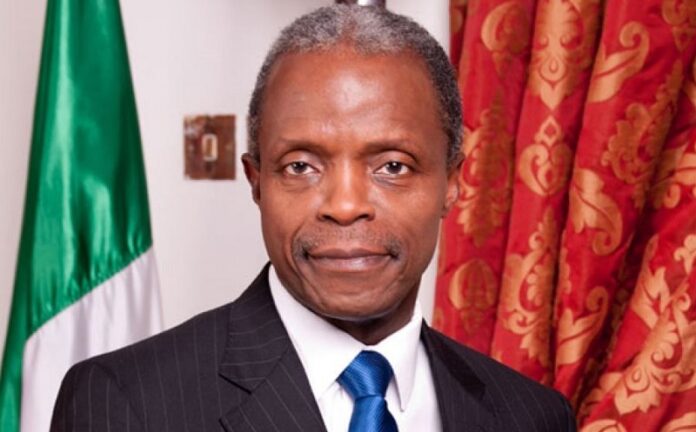 …warns NPA, DPR others against under remittance of revenue

By Suleiman Danjuma with Agency Report

The House of Representatives has declared that it is not investigating the office of the Vice President, Yemi Osinbajo over procurements made regarding the federal government’s school feeding programme.

Chairman of the House Committee, Hon. Wole Oke made the clarification in response to insinuations in certain quarters that Osinbajo’s office was being probed.

Addressing the Permanent Secretary of the Federal Ministry of Finance, Budget and National Planning, Mrs Olusola Idowu, Oke said the committee’s interest was in the Ministry and not Osinbajo’s office.

Oke said the probe was to get comprehensive documentary evidence of the procurement carried out by the Ministry.

He said: “By our records, the office of the Vice President is responsible for policy formulation and monitoring of the National Social Investment Programme.

“Our investigation has nothing to do with the office of the Vice President but the Ministry.

“Our interest now is on the Home School Feeding programme and that is why we want the Ministry to give us records of procurement. Nobody should make a mistake about that, our mission is not available for anybody to use to malign anybody. We want to put that on record that we are not investigating the office of the Vice President.”

Recall that Sadiya Farouq, the Minister of Humanitarian Affairs, Disaster Management, and Social Development, had recently disclosed that the federal government spent N523.3 million on its school feeding programme.

Farouq had said the federal government spent the sum on the Home Grown School Feeding Programme during the COVID-19 lockdown..

In the meantime,  the Speaker of the House of Representatives, Rep. Femi Gbajabimila, on Thursday said that the parliament would no longer tolerate under remittance of funds by revenue generation agencies.

Gbajabimila issued the warning at the commencement of a five-day interactive session on the 2021-2023 Medium-Term Expenditure Framework (MTEF) and Fiscal Strategy Paper (FSP) in Abuja.

The interactive session, organised by the House of Representatives Committee on Finance, was chaired by Rep. James Faleke (APC-Lagos)

Gbajabimila said that the country was currently facing a fiscal crisis, compounded by the intense disruption of economic performance and financial projections by the COVID-19 pandemic.

According to him, we have had to carry out severe cuts to the 2020 Appropriation Act, while at the same time borrowing more, to fund urgent development needs.

He said that the House recognised that the challenges would not abate in the medium-term.

Gbajabimila stated that the government had a responsibility to act with urgent determination to build the infrastructure of opportunity that would lift millions of citizens out of poverty.

According to him, “We recognise that we cannot accomplish these objectives using loans and outside financing alone.

“Therefore, we need to impose deep cuts in the cost of governance and improve internal revenue generation and collection, so that we can free up resources that can then be deployed to fund policy initiatives that will enhance the lives of our people.

“The revenue generating agencies of the Federal Government of Nigeria have a vital role to play in this regard.

“There has thus far been a consistent failure to adhere to the revenue remittance agreements, to which many of these agencies have committed.

“We have credible reports that these agencies desperately needed funds have, in many cases, been diverted to finance unnecessary trivialities.

“At the same time, the government is left scrambling for alternative sources to fund priority projects.

“We cannot afford this dynamic and we will not tolerate it any more,” he said.

Gbajabimila noted that the legislature remained the keeper of the public purse, with broad constitutional authority to act on behalf of the Nigerian people.

According to him, the House will ensure that the collective resources of the nation are efficiently administered in service of the public good.

The speaker noted that although Nigeria was in technical recession during the year 2016, concerted efforts and strong economic policies by government exited the country out of recession within a short period.

“Going forward and in line with the constitutional powers, the National Assembly will continue to engage MDAs and Revenue Generating Agencies (RGAs) to generate more money to fund the national budget,” he said.

Earlier, Faleke said that the discussions at the interactive session would revolve across different strata of revenue administration in Nigeria.

He said that the essence was to chart a new course to generate enough revenue to fund the 2021-2023 budgets.